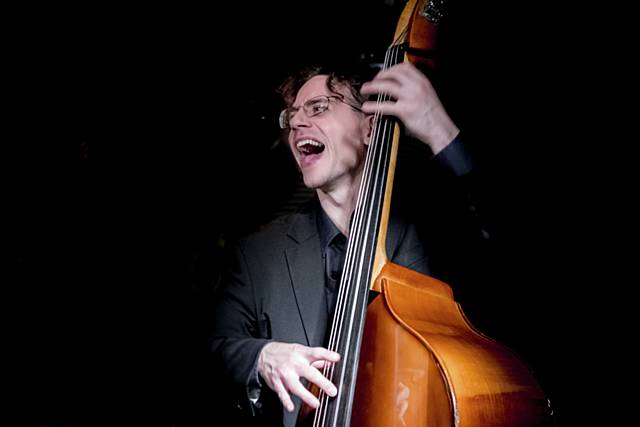 Since embarking on his freelance career at Rochdale Youth Big Band in 1996, multi-instrumentalist Tom Southerton has been involved with a multitude of concerts and shows around the world, as well as numerous studio recordings – John Salad, of JSM Media, was lucky enough to catch up with him for an interview.

Southerton first exhibited a passion for music when he was just nine years old: “I’d made my own drum set using cardboard boxes, tins, and other kinds of household junk; I had a long pair of chopsticks and I’d put on a record, I think it was a vinyl of Jungle Echoes.

“It was really cool, I just remember going mad over the top of the beats.”

It wasn’t until two years later, however, that he decided he wanted to pursue his interest in music: “I’d already listened to a whole range of musicians, and seen lots of live concerts, so

I’d been playing bits and pieces, but I think I was 11 years old, and had just started high school, when I decided I want to be a musician.”

In 2011, after touring relentlessly around the UK, Europe and Pakistan, Southerton relocated to Western Japan to become a full-time music teacher.

“When I was a child, I lived in Hong Kong for a couple of years, so to eventually live in Japan was not an alien idea to me as I’d already been provided with the image of living in Asia.

“I first visited Japan in 2000 and set myself the new goal of becoming a music teacher over there, even though I had no idea of how that was going to happen at the time.”

Following the move, Southerton began working a residency at the Fukuoka Hilton Seahawk, as well as playing freelance with a range of musicians. It was from here that his band, Cycles of Trio, was formed: “I’d been introduced to most of the leading pianists in Fukuoka, the main city down in Kyushu, when I eventually got hold of one player, Tachibana Yoichi.

“We had just played a wedding gig together and instantly got on.

“We decided we’d need a drummer, and so, tried out a couple during some gigs. They were good, but sometimes good isn’t good enough! I was looking for notes and lots of them, and shredding; somebody who’s a bit of a nutter.”

After proposing a few tracks to sound engineer Ito Kooryo, it was decided that he would fill the vacant drumming role, completing the trio.
In January of this year, after gigging around Western Japan, the band released their debut album, ‘Clear Speaking’.

“Kooryo engineered the album and worked very hard on producing it.” Said Southerton. “I suppose, officially I’m the producer because I always have the last say, or pipe up about how things should sound. In terms of engineering though, he’s your man.”

Speaking about the band’s jazz-fusion style, Southerton said: “I suppose I’m considered the leader because I have a vision of our sound. We bring a composition to a gig or to the studio and then we’ll try it, but it’s always like: ‘what’s the twist on it Tom?’ So, we practice it, rearrange it, take it and keep refining it until it’s there.”

Aside from his residency, band, and freelancing duties, Rochdale-born Southerton continues to work on his own, original project, he said: “I’ve composed an album’s worth of material for melody, bass, and drums.

“The drummer sessions start in October (last month), then I’m going to do the bass and then it’s over to the melody player. It should be out in the coming months.”