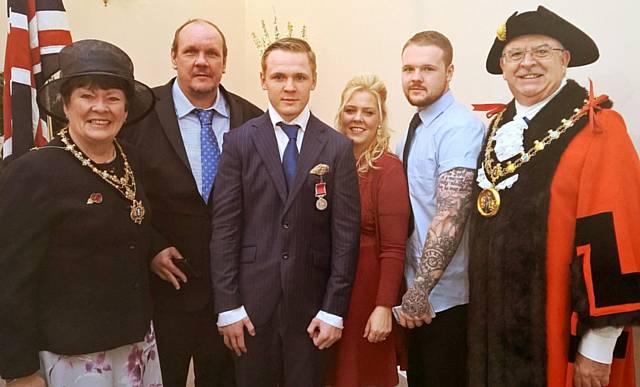 Mayor of Rochdale, Raymond Dutton, and his wife, Mayoress Elain Dutton, presented 26-year-old Mr Farrell-Mather with the medal, which is awarded for meritorious civil or military service worthy enough of recognition by the Crown.

Mr Farrell-Mather BEM had been an exceptionally promising boxer growing up, boxing for England as an amateur and even being tipped to achieve a world title. However, in 2012, at the age of 21, he received a career ending brain injury during a bout. He became bed ridden and lost 30% of his brain’s functionality. Remarkably, he recovered to an extent which a neurosurgeon describes as a ‘miracle’, although his speech and short term memory continue to be affected.

Despite his career coming to a devastating halt, he responded with inspirational positivity, mobilising his local community to fund and build a boxing gym in a challenging area – with the intention of preventing young people from being led astray. From here, he trained for his coaching badges so that he could take an active lead in working with and training the young members.

Mr Farrell-Mather BEM said: “Starting the gym was something I think I was always going to do, I didn’t have a burning passion for it at first, but I knew I was going to coach at the end of my career, it just came around quicker than expected.”

The 26-year-old holds regular classes for a variety of people, from children with behavioural difficulties, to pensioners, to the homeless. He has dedicated time to help take in those off the street who may be drug or alcohol dependant, and work with them to turn their lives around, he said: “I have helped most of them improve their health and sense of well-being; a lot have even gone on to get their own house and start a family.

“I also help keep kids with behavioural difficulties out of mischief; even if it’s just taking them off the street for an hour, it helps.”

Not only this, Mr Farrell-Mather BEM regularly addresses large groups at his local church and schools, speaking on the fitness benefits that boxing can bring. He believes that, since starting up the gym, his social skills have developed: “I never really used to socialise that much, I’m still not the most sociable guy ever, but the gym has helped me; listening to stories from the members and talking to them about their lives has helped me understand a lot more.”

On receiving his BEM, he said: “I’m buzzing. It feels like it’s been a long time coming but it’s a lifelong achievement that I’m really proud of. To do what I’ve done and to be recognised by the Queen is a special thing, for me and my family.”

Aside from all his work helping the local community, Farell-Mather BEM also trains fifteen professional boxers, making him the youngest professional boxing manager on record – another enormous achievement.

He now looks forward to watching his fighters compete at his ‘Friday Fight Night’ event at the Bowlers Arena, Manchester on 18 November. The event will be filmed by ‘It’s About Boxing’ for channel 468.

The BEM was awarded to subjects of the United Kingdom until 1993, after which time it lay in abeyance. In 2011, following the Commonwealth Heads of Government meeting, then-Prime Minister David Cameron announced that the medal would once again be issued in the UK, beginning in 2012, to coincide with the Queen’s Diamond Jubilee.