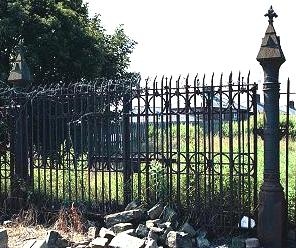 The Birch Hill Hospital gates, which were originally the Dearnley Workhouse cast iron gates and posts, have been restored.

Raymond Cranney purchased the iron gates seven years ago with the intention of using them for an old property, however, after researching into their history, decided he needed to send the gates back to where they belong.

In 1871, Rochdale Union purchased a 24-acre site on the slopes of Birch Hill and Starring Hill at Dearnley for £2,500 and began construction of a large workhouse the following year.

In March 1873, the old Spotland workhouse partially collapsed, however, since the building was far from ready, it was patched up and used for four more years.

The new workhouse, designed by George Woodhouse and Edward Potts, held a capacity of 847 inmates, with 29 officers, and cost a total of £85,000. It was officially opened by the Mayor of Rochdale, Alderman T. Schofield, on Wednesday 19 December 1877.

In 1902, an infirmary was built at the north of the workhouse, and during the First World War was taken over by the military who erected tents in the grounds.

Following the inauguration of the National Health Service in 1948, the site became a single hospital known as Birch Hill.

Until its eventual closure in 2013, some of the original buildings were still in use.

Persimonn Homes purchased 28-acres of the former site in 2007 for £27.5million, aiming to deliver 400 new homes to the community. The only original piece preserved in the construction is the clock tower, which will form the centrepiece of the finished design.

Mr Cranney, who bought the original gates before the renovation, has refrained from using them in construction and selling them to potential buyers from Australia.

He said: “I believe this place to be of historical importance, so much sadness has gone through these gates and there is so much heritage behind them. They need to go back to where they belong.

“I remember Liverpool City Council having an awful time trying to get back some important heritage and don’t want Rochdale to go through the same ordeal. I spent £2,000 on the gates and a further £1,100 getting them shot blasted and cleaned up. They’re in good condition.”

Mr Cranney has spoken to Rochdale Borough Council in the past but had no luck in selling the gates, he said: “I’m at a dead end really. I can’t believe nobody wants to buy their history back, even the council. It’s quite sad.”