You are Here: Home » News » News Headlines » Dippy the dinosaur is coming to Rochdale

Dippy the dinosaur is coming to Rochdale 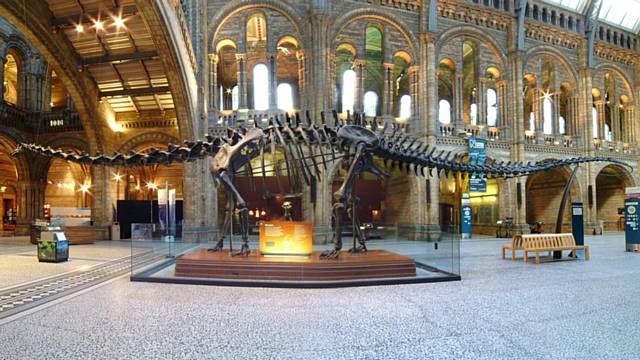 Dippy the dinosaur is coming to Rochdale

Dippy the Diplodocus, the UK's most famous dinosaur, is coming to Rochdale during a national tour.

Dippy, a 21m-long plaster-of-Paris cast of a Diplodocus carnegii skeleton, will be at Number One Riverside between February and June 2020.

The dinosaur, known to millions from its usual home in the Natural History Museum, will be used as the centrepiece of a display that will highlight local natural history and nature collections.

When it was unveiled to the public in 1905, the Diplodocus became a star, and has since featured in newspaper cartoons, news reports and even played starring roles in film and television.

Diplodocus was first described as a new type of dinosaur in 1878 by Professor Othniel C Marsh at Yale University. The species lived sometime between 156 and 145 million years ago and belongs to a group called sauropods, meaning 'lizard feet'.

When railroad workers unearthed the fossilised bones of a Diplodocus in Wyoming, USA in 1898, newspapers billed the discovery as the 'most colossal animal ever on Earth'.

Scottish-born millionaire businessman Andrew Carnegie heard the reports and set out to acquire the bones as a centrepiece for his new museum in Pittsburg.

During the reconstruction of the skeleton at the Carnegie Museum, experts discovered subtle differences from the two other Diplodocus species known at the time, Diplodocus longus and Diplodocus lacustris.

The new species was named Diplodocus carnegii in honour of its owner.

King Edward VII saw a sketch of the Diplodocus while visiting Carnegie at his Scottish castle and remarked how much he'd like a similar specimen for the animal galleries of the Natural History Museum. Carnegie obliged by commissioning a replica cast of his dinosaur.