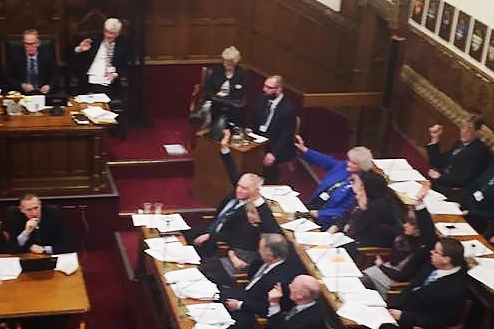 Councillor Ashley Dearnley (seen with his hand raised high voting for the increases) will see his total allowance rise from £17,184 to £21,425

The massive increase in councillors' allowances - voted for by councillors at last week's full council meeting - means the total cost of the allowances paid to councillors will rise to just under £900,000, an additional £172,600 per year.

Half of all councillors receive a special responsibility allowance.

The SRA of council leader Richard Farnell is calculated as three times the basic allowance. The others are calculated as a percentage of the leader's SRA.

*A small number of minor SRAs are to be discontinued and the Lead Member for the Armed Forces SRA is significantly reduced.