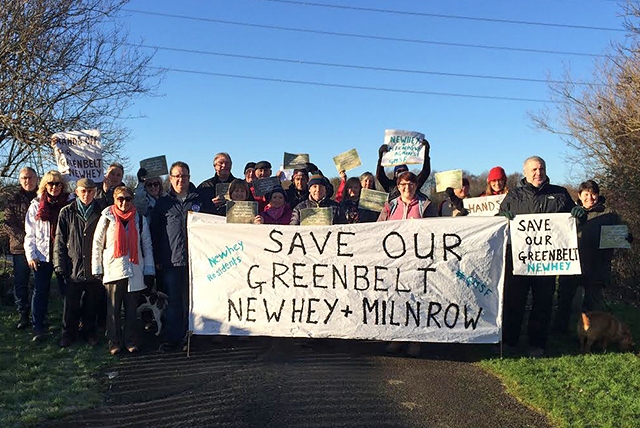 Milnrow and Newhey 'Save our Greenbelt' campaigners

A protest against plans to build homes on local Greenbelt gathered huge support when campaign groups marched from various locations to Tandle Hill on Monday.

Thousands joined up with groups from Milnrow and Newhey, Middleton, Royton, Chadderton and Shaw marching from their respective areas to the monument at Tandle Hill.

The GMSF plan outlines a need for an extra 227,200 new homes across Greater Manchester by 2035. Paul Bolton said: "Loss of habitat and amenity are the main concerns voiced by locals who value green space for recreation and wildlife. At threat are deer, fox, badger, small mammal populations and over 30 species of birds."

Councillor Andy Kelly said: "The turn out just goes to show the strength of feeling. People are angry as the bigger developments will have an even more detrimental effect on our villages. The consultation is very clear on the plans for very large numbers of new homes but very sketchy on what kind of infrastructure would be needed to support them. Our infrastructure simply cannot cope with these plans. We have no idea for example of how our roads will cope, no idea about how our health services will cope and we don't know how our schools can handle hundreds of extra pupils. If we lose our Greenbelt, it will change our villages forever and I am not about to sit back and let that happen without a fight." A public meeting, arranged by Councillor Kelly in conjunction with local campaigner, will take place on Friday 13 January at Newhey Lodge, on Huddersfield Road. Councillor Kelly said: "Many people have told me that they want to object but just don't know where to start. This meeting is designed to assist local people to have their say.

"In attendance will be campaigners who saved their local greenbelt from Macclesfield two years ago. They will be advising local people on their objections and a huge letter writing session is planned. This really is the last chance saloon for our villages, and each and everyone of us owes it to future generations to have their say."

Councillor Chris Furlong called the huge numbers "an historic turnout for the Tandle Hill protest walk against the GM Spatial Framework proposals". He added: "The Boarshaw walkers met at Boarshaw Bridge at 10:30am this morning and the Slattocks walkers met at Smalley Hall before making their way to Tandle Hill in great spirits. There were a large number of families with children amongst the walkers and there were plenty of dogs happy to join their owners up the hill. In echoes of the past, it really was an example of people power at its best."

The GMSF, which set out proposals to provide housing and investment opportunities for sustainable growth over the next 20 years, is currently out for public consultation with residents encouraged to have their say on the proposals included.

The public consultation is open until January 16 and is available online at: