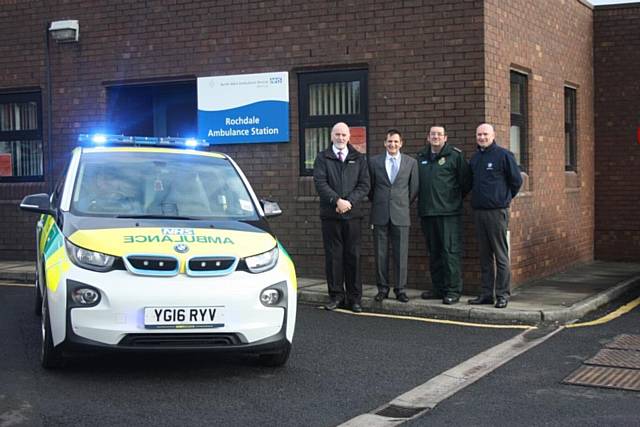 NWAS will be one of the first ambulance services in the country to introduce electric cars as part of their standard fleet and it is expected that it could save the Trust up to £2.5 million in fuel costs over the four year lease period.

RRVs are cars that have been converted into emergency response vehicles. They are designed to be able to attend emergencies quicker than regular ambulances because they are smaller and can get through traffic more easily. Although they don’t generally carry patients to hospital, they are staffed by a paramedic who is able to administer life-saving treatment at the scene of an emergency.

“The introduction of these electrically powered cars will not only provide huge cost savings for the Trust, it will also have a huge impact on our carbon footprint, reducing the carbon contribution from our RRVs from 1379.28 tonnes to 100.8 tonnes, a reduction of 73%.”

Maintenance and lease costs are also reduced with the introduction of the new RRV model, with an overall expected annual saving of over £4,300 per vehicle.

NWAS currently has 174 rapid response vehicles throughout the North West and will initially be introducing four electrically powered vehicles as a trial. The Trust will look to replace all RRVs with the new electric models gradually in the coming years once the life-span of the current vehicles comes to an end.

The four vehicles, initially being trialled in Bury and Rochdale, will be an updated version of the BMW i3 model which has won various awards including UK Car of the Year and Green Car of the Year.

The BMW i3 REx AC model, which is already being used by police and fire services in the UK, is equipped with a system that can support the vehicle by extending the mileage range using a small petrol engine that can generate electricity for the battery. This will only be used in extreme circumstances but will provide additional reliability for NWAS.

Mr Maher said: “Although electric cars have been around for some time, improvements in technology from BMW have allowed the Trust to be confident enough to use them for emergency response units.

“The vehicles are fitted with additional technology meaning the engine can be powered by petrol in the unlikely event that the battery does run out. With the correct charging routines and future battery advancement it is hoped that this system will only be used on a small number of occasions to allow the Trust to achieve a target of zero emissions.

“Although the technology available on the market has not yet advanced far enough to allow the Trust to introduce electric vehicles throughout its entire ambulance fleet, this is a very exciting starting point and we are looking forward to further advances in the future.”

A number of electric charging points have been installed across the Trust and the first vehicles are expected to be in operation by early April.