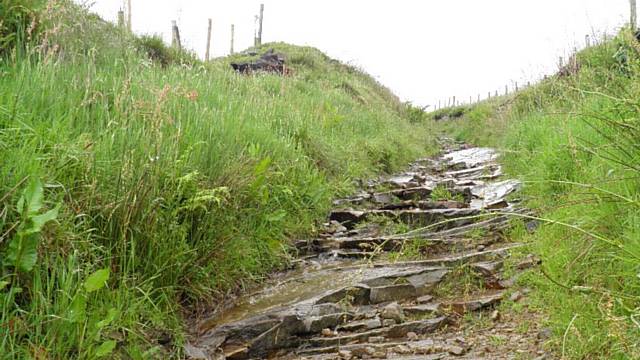 The Milnrow and Newhey Bridleways Group (MNBG) are hoping to raise funds to renovate Carr Lane, in the hopes of preserving the lane’s heritage and making it safer for all.

The group says the lane is in ‘a dangerous state of disrepair’ and ‘in urgent need of renovation’ to safeguard local people whilst preserving this historically and geographically important right of way.

Repair costs to fix the lane with a non-eroding surface have been estimated by contractors as being in the region of £70,000.

Nicola said: “I thought he had had it. I had got off him to lead him down as it was so bad, then he fell right down off all four legs and onto his shoulder. Luckily, he got back up to his feet but I thought he had really damaged himself.

“If I had been riding him, I could have been trapped under half a tonne of horse, and Carr Lane is not easily accessible by the emergency services. I decided then I was going to try and do something about it, we had done some work with it during Lesley and Elaine's [who previously ran the group] era but the works had just eroded away.”

Nicola reformed the group along with her friend Gill, who became chairperson. Since then, they have become affiliated with the British Horse Society as an Access Group.

“All of them struggle to use the lane and have reported horses, including small ponies carrying children, falling on Carr Lane; one lady even suffered a broken leg after her horse fell.”

Previous works carried out around twenty years ago have not been maintained. Inadequate drainage has led to the surface being washed away, resulting in exposure of slippery bedrock and a rocky sandstone terrain which is hazardous to negotiate on horseback, bike and even foot.

Nicola added: “Carr Lane is a community asset for everyone; it’s a multi-user route for cyclists, walkers, runners and riders.

“Furthermore, it is a heritage trail and of interest to those who care about the local history."

MNBG are hoping to apply for funding once costs are exact, and in the meantime, have been organising their own fundraiser events towards the costs.