You are Here: Home » News » News Headlines » How to turn twigs into cash

How to turn twigs into cash 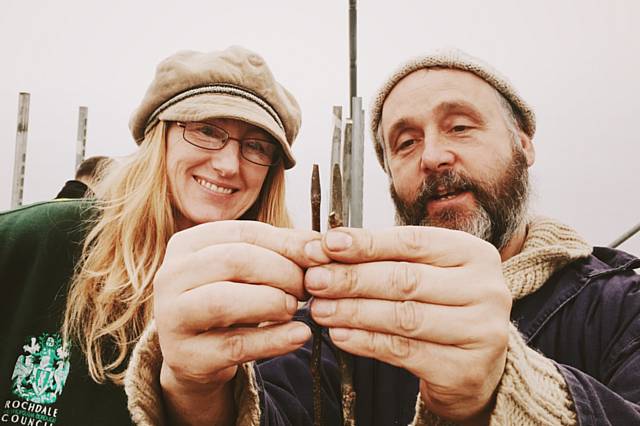 Turning twigs into trees – otherwise known as grafting – is a highly skilled job beyond the reach of many amateur gardeners.

However, thanks to Helping Britain Blossom and a host of green-fingered volunteers, and training at Bowlee Nursery, Middleton, a mass ‘grafting’ is underway across Greater Manchester, with a vision to preserve the city’s heritage orchards and fruit varieties – as well as making a few quid in the process.

The green army of grafters, who are being given specialist training by orchard specialists at Helping Britain Blossom as well as other gardening experts, hope to create more than 500 trees – some of them heritage Cheshire fruit-bearing varieties - which will be offered to Greater Manchester’s numerous community orchards.

In addition, once the small trees have developed in 12-18 months’ time, members of the public will be able to buy the saplings in order to establish their own mini orchards in their gardens and back yards. Money raised from the sale of the trees will help towards the preservation of existing orchards and the establishment of new ones.

Dan Hasler is Helping Britain Blossom’s Greater Manchester Project Manager. He said “This initiative is not only a wonderful way of preserving Britain’s rich orcharding heritage for future generations to enjoy, it’s also a great way of teaching people a specialist skill and helping them develop a sense of ownership of individual trees, thanks to the traceability aspect of the project.

“Every single tree will be tagged to show where it came from and who grafted it. So each time they return to the orchard in the future, they can check up on their own grafted fruit trees, look after them and reap the rewards of the fruit they bear. It would be fantastic if the initiative helped to identify other lost and hidden orchards around Greater Manchester too.”

A number of different partners are involved in the Hard Graft, including Manchester’s City of Trees and Rochdale Parks and Countryside Service, who run ‘The Green Volunteers’ scheme.

Adam Clayton is its Parks and Countryside Ranger: “This initiative is about preserving old varieties and the orchards themselves, getting people involved and encouraging people to try fruit that they may not have tasted before. We’re looking forward to being able to offer the grafted trees for sale to the general public from the Hollingworth Lake nursery in the spring of 2018.”