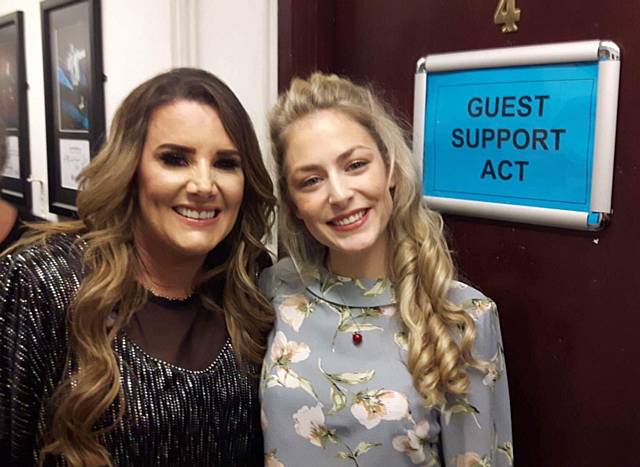 Olivia Deane, a singer-songwriter from Rochdale, supported X-Factor winner Sam Bailey on her ‘Sing My Heart Out Tour’ in Yeovil on Thursday 27 April.

Olivia entered a competition Sam was running to showcase local talent on her tour. She won, and having recently relocated to the south-west to pursue her music career, supported Sam at Yeovil: her first time as a supporting act.

The 20-year-old, who lived in Rochdale until earlier this year, said: “I have been writing songs since I was nine-years old. I decided to showcase my love of writing songs and singing them last year. I taught myself ukulele from YouTube just over a year ago and I made it through to the grand final of a national competition Open Mic UK with my original songs and performances and now I have supported Sam Bailey.”

Olivia is currently living above a recording studio where she is recording and writing songs. She plays the ukulele and sings and writes country/pop music. She also hopes to inspire other young girls from the borough to venture outside their comfort zone and create their own futures.

She explained: “'I think that it would inspire those from deprived areas, such as Rochdale, to chase their dreams regardless of where they are from. I want to remind the young girls of Rochdale that they can venture out of the small town they were born in and create more for themselves if they really want to. If you have a dream, go and get it: you create your own future'

Olivia is planning on releasing her first EP this summer with six tracks of original music.

Sam Bailey won the tenth series of the X-Factor in 2013. She released The Power of Love the following year, which sold over 165,000 copies and went gold, selling over 165,000 copies. Her latest album, Sing My Heart Out, was released in September 2016.