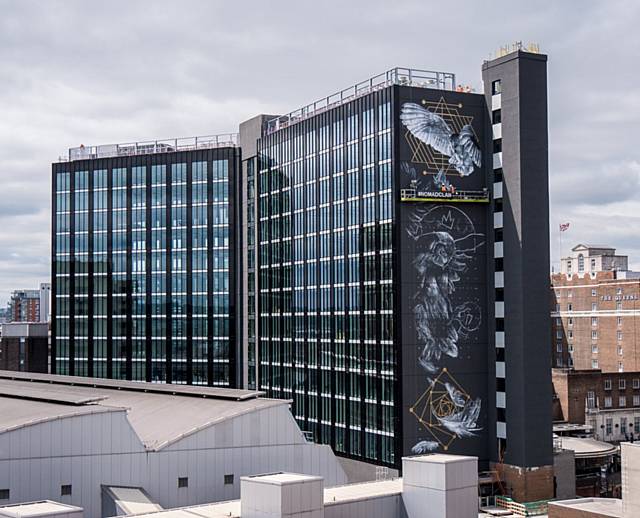 It has taken the pair, dubbed 'one of street art's finest female duos', just over two weeks and hundreds of cans of spray paint to complete the work.

The duo - aka AYLO and Cbloxx - have worked up to eight hours a day harnessed in a cradle suspended down the side of the building, through the last few weeks’ heat, wind and rain.

The giant artwork entitled 'Athena Rising' soars a monumental 46.8 metres (153 feet) from the ground, making it several metres taller than the statue of Christ which looms over Rio de Janeiro, and only just shorter than the Statue of Liberty!

Using the full length of the ‘platform’ building as its canvas, which can be viewed from Leeds train station’s platforms far below, the striking 11 metre-wide design centres on an owl in flight, alongside the moon and a crown, as a nod to the artists involved.

The huge statement piece is part of the city-wide street art project ‘A City Less Grey’, initiated by East Street Arts and fully funded by LeedsBID (Leeds Business Improvement District). The project aims to animate the city and incorporate works of art onto and into Leeds’ buildings and streets.

Joy said: “It has been a challenge but one we have taken into our stride, finishing sooner than we had expected. We have had great feedback and are receiving endless heart-warming emails from the public in Leeds. We hope we have done you proud.”