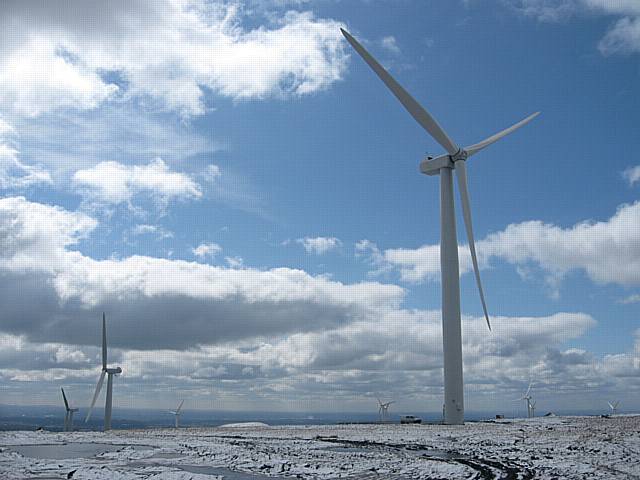 Plans to expand Scout Moor to be the largest onshore wind farm in England were overruled by the government.

Planning permission was granted in 2015 but that decision was called in by the government.

Its final ruling rejected proposals for a further 14 turbines in Rossendale but approved plans for two in Rochdale, ‘subject to conditions’.

Possible revised planning conditions for the Rochdale turbines, with a maximum height to the tip of the blade of 115 metres (above ground level) for a temporary period of up to 25 years, include:

The announcement follows a public inquiry into the planning decision by both Rochdale and Rossendale councils. Scout Moor Wind Farm Expansion Limited (SMWFEL), a joint venture between Peel Energy and Untied Utilities, submitted the plans in 2015 in a hope to extend the existing wind farm.

Scout Moor wind farm opened in 2008, to much local opposition, and is already the second largest on shore wind farm in the country.

Currently, there are 26 working turbines on the wind farm, which is located above Rochdale and Heywood.

A representative for the Prickshaw and Broadly Fold Conservation Area, who opposed the expansion, said: “Local communities are delighted with the decision made by the planning inspector in his recommendation and the Secretary of State in refused the application made by Peel to extend the footprint of the existing wind farm.

“This decision is particularly pleasing when you consider that Peel wanted an additional 16 turbines and Coronation Energy a further 17 to the existing wind farm.

“A couple of concerns have been raised regarding the two turbines that have been approved. Being 115m tall compared to the 100m that the existing turbines are, they will be noticeable larger. They have also been allowed an operating life of 25 years, which is significantly beyond the life of existing turbines on Scout Moor.”

The Rooley Moor Neighbourhood Forum has also been contacted for comment.