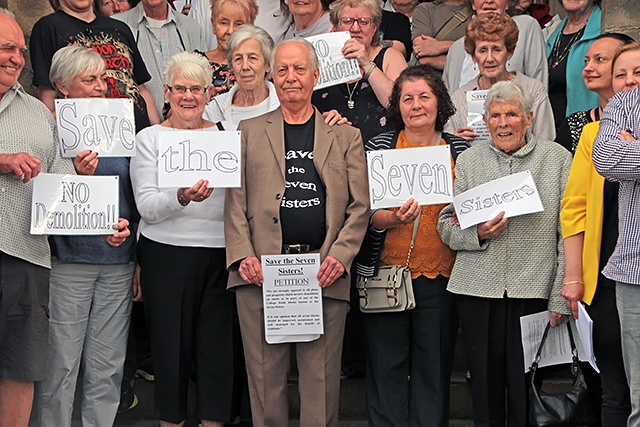 Former Mayor Robin Parker presented a petition of over 500 signatures in support of saving the College Bank flats to the Chief Executive during Wednesday’s council meeting (12 July).

A full public gallery that overspilled into the main chamber turned out to support the petition.

Following the news that four of the 'Seven Sisters' tower blocks at College Bank could be demolished under proposals put forward by Rochdale Boroughwide Housing (RBH), Mr Parker launched a petition to ‘Save the Seven Sisters’.

Mr Parker, who was Rochdale’s Mayor between 2008 and 2009, has lived in three of the flats, Underwood, Holland Rise and Dunkirk Rise, since moving to Rochdale in 1974. He strongly opposes Rochdale Boroughwide Housing’s proposals to demolish four of the College Bank flats.

In February this year, Mr Parker called for the iconic flats to be ‘considered a heritage asset and listed accordingly’.

Speaking during the presentation, he said: “I am presenting a petition against the demolition of any of the College Bank blocks known as the Seven Sisters. It currently consists of 544 residents’ signatures and 391 from the wider community. This is very much work in progress and we expect the numbers to increase considerably.

“These are not ordinary high-rise blocks, but were built in the sixties to an exceptionally high standard in order to attract professional people into the borough, as well as for local residents. Over the years, they have had many improvements and while they could benefit from more, they are nowhere near past their prime. These blocks are an iconic feature of our landscape. Although Historic England turned down an application for national listing, they said in their report that College Bank ‘does have local interest as a thoughtfully designed response to the provision of good quality social housing to replace slum housing and are undoubtedly a prominent landmark, being clearly visible from the nearby M62’.

“This is reflected in comments by residents:

‘They’re iconic. When you see the Seven Sisters you know you’re home.’

‘Love it here, it’s flat, there are no steps so it’s handy for older people. They feel safer, with cameras and security.’

‘I have heart failure and need to be near my GP and the town centre. It would be stressful for me to move.’

‘We love our home: it’s our first home together.’

“There are without doubt issues regarding the lettings policy. I was only this week contacted by a person I know well from Middleton who is elderly, living on his own, and wishes to downsize. He has bid for three months for College Bank properties and has been unsuccessful, yet he is exactly the kind of socially responsible resident that would be perfect for our estate.

“We believe that College Bank applications should be carefully screened as they used to be, as there are some residents whose anti-social behaviour proves that they are not appropriate for high rise living, but such problems are management issues and demolition is not the way to solve them.

“Rochdale Boroughwide Housing is saying that it would need millions in investment to bring them up to scratch, but it is hard to believe that anyone who could use that phrase has been inside one of our properties, where they would see the excellent quality of life that they offer us.

"They are saying that residents will be offered similar properties to the ones they leave, but it is our view that this is an impossible task because there is no social housing in the borough equivalent to the safe and spacious standards of College Bank, and it is unlikely that they will be building anything new up to this standard.

“The proposed redevelopment, which includes the demolition of four blocks, is flawed and we ask for future support from members [councillors] in our efforts to prevent it happening.”