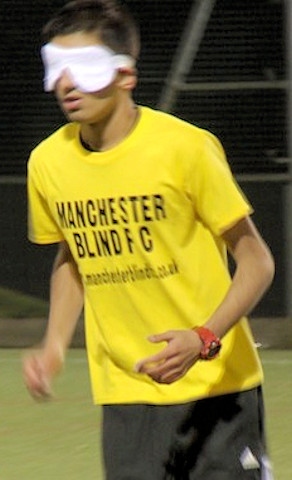 Blind footballer Azeem Amir has joined Inspire A Star to help him reach his international dream of playing for the England Blind Football team.

Inspire A Star aims to ‘help a generation achieve their sporting dreams whether the dream is to learn a new sport or become a future star’ through a crowdfunding-style platform.

Azeem, from Rochdale, was born with no sight in his right eye and slight light perception in his left eye but has never let this act as a barrier in life.

The A-Level student made headlines last year when he became the youngest blind runner in the world to complete a Tough Mudder at the age of 17, raising almost £5,000 for the Manchester Royal Eye Hospital, and has also completed the Great Manchester Run twice, with his old PE teacher Sam Hinchliffe as a guide.

He said: “Sport is a huge part of my life. I don’t allow my disability to overshadow my ability. I strive and ensure to be on par with, if not ahead, of fully-able athletes.

“I am hoping to pass on the enthusiasm I have for sport to others as well as challenge people’s opinions and perceptions on disability and ableism especially within the workplace.”

Whilst Azeem is a keen sportsman, taking part in various sports from cricket to tennis to boccia (a precision ball sport), football is his true passion. The talented youngster has ambitions of reaching Team GB in the Tokyo 2020 Paralympics.

The 18-year-old explained: “Inspire A Star approached me willing to help. I tried to access funding through lots of different trusts and charities, however most came back saying either my sport is not recognized by them or request a nomination from my national governing body, which they cannot give due to me being a step below.

“The need for me to access this funding is vital to develop and get onto the next step with my football. This would be the England blind talent program. Once at this level, I will be able to access national individual grants such as TASS and Sports Aid.”

Recently, he has been enrolled on the England Emerging Talent Program and also coaches with the ‘Diddikicks’ organisation, which delivers introductory football sessions to young children.

Azeem continued: “I train five hours a week currently; one hour on a Wednesday night in Manchester, two hours on a Saturday morning in Liverpool, and two on my own. I then join the other players to play in the league at the RNC in Hereford the last weekend of every month nine times a year. I aspire to reach such a level that I can get chosen to represent my country.

“The money I will be applying for would go towards covering expenses for travel to and from training and games, a kit bundle in preparation for the 2017/18 season and funding for a training facility to use weekly. This is currently being paid for by my dad; he doesn’t complain, however, I do feel that it’s not fair on him and the rest of my family. Deep down, I know it puts a burden upon them, and even though they have so much amazing support for me, they still lose out when they shouldn’t.”

He added: “Any support would be greatly appreciated to help me achieve my dream.”

Azeem is also a proud ambassador for Sport England’s All4Sport and Link4Life’s Playground to Podium, giving motivational talks to many hundreds of disabled children throughout the borough. Last summer, he completed the National Citizen Service programme and was also awarded the Disabled Sports Achiever of the year 2016 and a Special Recognition Award from The FA.