Dominic Apenteng to skydive to raise funds for Samantha Smith 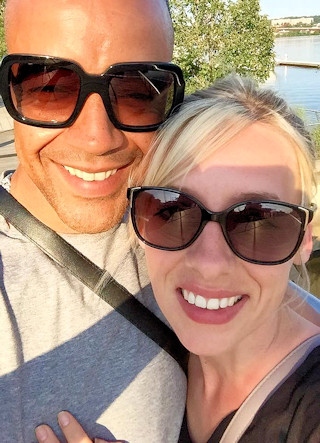 Dominic is skydiving to raise funds for partner Sam's surgeries

Dominic Apenteng is set to take on a tandem skydive to raise funds for his partner, Samantha Smith, on Sunday 27 August.

He said: “Against my better judgement, I shall be throwing myself out of a plane in aid of the Save Samantha fund.

“Although Sam has had her primary surgeries, it seems she may well need more and is currently having a torrid time over in the USA trying to recover from the first ones and pay for all the new issues she's having to handle on a daily basis.

“With this in mind, all efforts and continued support are and will be hugely appreciated: we're not far off the anticipated amount needed. I know a whole bunch of you kindly folk have made donations or supported already, but it would be great if you can at least share this amongst your peers so that we can keep the ball rolling.

“Anyone who donates please just tag ‘skydive’ on the page alongside your donation.”

Samantha underwent a five-and-a-half-hour lifesaving procedure in Washington DC on 11 July to stabilise her neck and back and release her tethered spinal cord from her vertebrae. Crushed bone was mixed with bone marrow from Sam’s hip and used to fill in the space in her neck and cervical spine; over the course of six months, new bone will form and build over the sites.

However, the psychotherapist has since suffered a setback in her recovery after she slipped and fell just days after the surgery. There is the possibility of potential damage is a risk as Sam banged both the site of her tethered cord and the back of her neck.

She is now struggling to find ways to manage the pain as her body processes the pain relief medication too fast, due to her Ehlers Danlos Syndrome.

Sam, from Smithy Bridge, was diagnosed with Ehlers Danlos Syndrome (EDS) in December 2016, after ‘a lifetime of pain and eight years of tests, misdiagnoses and ill health’.

EDS is a genetic condition that means connective tissue holding the body together is faulty and too weak, causing extreme widespread pain, daily dislocations, cardiac abnormalities and multiple other illnesses. It affects around one in 5,000 people worldwide.

She had also received diagnoses including Craniocervical Instability (CCI), which can arise in EDS sufferers due to a lack of connective tissue support at the craniocervical junction (between the skull and first two vertebrae of the spine), tethered cord syndrome, Atlanto Axial Instability (unstable vertebrae which are easily dislocated).