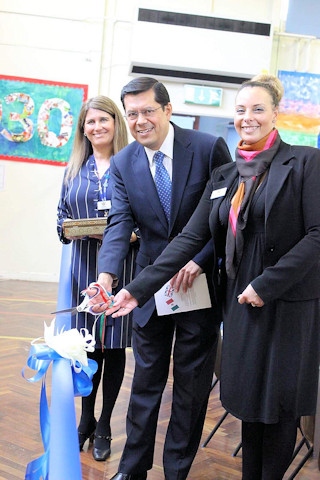 The Spanish teacher, Maria Oliver, who is originally from Mexico, arranged for Consul Gomez Toledo, the Mexican Consul to the UK, to visit the school to officially open a travelling art exhibition that Bamford are very proud to be hosting. This is the first time the worldwide exhibition has been hosted in Manchester.

The art exhibition displays entries from last year's worldwide drawing competition run by the Mexican Embassy, which had the theme of Mexican music and traditions.

The children were also delighted to have been invited to take part in this year's drawing competition 'Este es mi Mexico' (‘This is my Mexico’), with the theme the emigration of the Monarch butterfly.

A special assembly was held in the school for parents and visitors, which included traditional Mexican dancing from some of the students, a Spanish poetry recital and singing.

Consul Gomez Toledo then spoke about the exhibition and officially opened it for the school to enjoy.

The headteacher, Lisa Matthews, also thanked Consul Gomez Toledo for his kind donation of books and for contributing to the development of International Cultural education at the school.