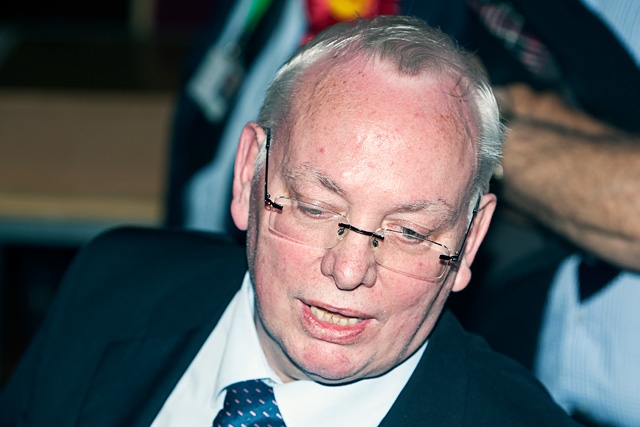 Giving evidence at the inquiry into allegations of the sexual abuse and exploitation of children at Knowl View School on Wednesday (25 October), Councillor Peter Joinson said that his Labour Party colleague, the Leader of Rochdale Borough Council, Councillor Richard Farnell, was "probably not telling you the truth” when he gave his evidence to the inquiry on Tuesday.

Councillor Farnell not only said that was not true, when pressed by Mr Altman he said Councillor Joinson was lying.

Asnwering Mr Altman's questions at the inquiry on Wednesday, Councillor Joinson confirmed he was aware of articles published on Rochdale Online and the Manchester Evening News in 2014, questioning the Labour Party leader’s knowledge of the Knowl View abuse.

He said: “It’s virtually the same story, more or less.”

Mr Altman asked: “Were both of those press releases in relation to Councillor Farnell’s then recent appointment as leader of Rochdale Council and his public claim that when in he was in post as leader between 1986 and 1992 he was unaware of allegations about sexual abuse of Knowl View boys.”

Mr Altman asked: “We know that on the 11 June of that same year, within a few days, you had a meeting with him. What was the purpose, or the primary purpose, of that meeting?”

He replied: “I was the Labour group chief whip, and there had been a change of leadership. Prior to the new leader taking control, my job was to send out to all the Labour group members the potential group positions, which they would have wanted for the following municipal year.

“Whilst the leader determines who his cabinet is, and what portfolios they have, there were a lot of minor positions in various subcommittees and various panels that needed to be filled. I had the documentations for all that because I was, I had all the correspondence and the applications from all the members with me and it was to go through that.

The councillor says the meeting took place "with the leader of the Council" who, at the time, was the new leader, Councillor Farnell.

He continued: “Yes, it was a pre-arranged meeting because, basically, I live in Middleton and I’ve really no need to go to Rochdale, to the Town Hall or the council offices, unless there is a specific meeting.

“As a consequence of the press releases, as the Labour group chief whip, as I mentioned before, one of the areas was to make sure no actions affect either the party or the council  and therefore just needed to get him to clarify his statements for the group records.

He confirmed this was "as a result of the press releases".

Councillor Joinson told the inquiry that the meeting took place in the "new council offices at Riverside" and lasted “probably about 20 minutes or so".

Mr Altman said: “Mr Farnell told us yesterday that to the extent that this was a meeting, that you merely popped your head round the door.”

Councillor Joinson responded: “As previously said, I wouldn’t pop my head round the door because I wouldn’t be in Rochdale unless it was a pre-arranged meeting.”

Mr Altman commented: “So the effect of his evidence was you popped your head around the door, had a short meeting and that was that.”

He then told the Inquiry that they sat in Farnell’s office and took "handwritten notes" over the course of the meeting. He said he copied the notes by typing them, and the typed notes available to the inquiry were a "faithful copy".

Mr Altman asked: “What became of your handwritten notes?”

The councillor responded: “Unfortunately, the police asked me that question. I’ve had my house upside down and I can’t find them.

Councillor Joinson confirmed: “I am, yes.”

Councillor Joinson then told the inquiry he "probably typed the notes up the day after writing them".

He was then asked what the purpose of the note was.

He answered: “It was for Labour group records, but also really, as a consequence of seeing the press releases, and him saying didn’t know anything about the allegations of sexual abuse, and then he would actually offering me the evidence that he’d seen in draft report, I was concerned there was an issue that probably the Labour Party need to address.

He added he "took the opportunity at the end of the meeting" to raise the issue "rather than have a second meeting" and that Councillor Farnell was "unaware" of this.

Mr Altman then read out: “At the end of the meeting, this is how the note reads...

'I raised with the leader the issues of press articles that questioned his knowledge of the Knowl View abuse reports.

'As a consequence of that report, the council was preparing the report; this was between approximately March and June 1992. Councillor Farnell said he had only seen a draft report and the full report wasn’t complete until June. By that time, he had lost his council seat and ceased to be a council leader.'

Councillor Joinson confirmed Councillor Farnell told him these points during their meeting.

Mr Altman continued: “Does the last sentence read – ‘Councillor Farnell stated the full report was presented to Councillor Rowen, who had taken the leadership of the council’?”

Mr Altman asked: “In a further witness statement you made to Operation Clifton, on the 7 April 2016 in fact, did the police come back to see you?”

He replied: “Yes, this was the second interview.”

Mr Alman added: “In this statement were a couple more things that you added, as to what Councillor Farnell had told you during the course of your 11 June meeting.”

The inquiry heard that Councillor Farnell allegedly named Mr Shepherd during the meeting, which Councillor Joinson ‘didn’t record in the first police interview’ or his notes from the meeting.

'Richard Farnell did say that there were allegations of sexual abuse contained in that report. He did not say where he had seen it, but I presumed that as the leader of the council then he would have seen it at his office, but he gave no indication as to who may have brought it to his attention.’

Mr Altman asked: “Were you talking about the draft report?”

Mr Altman said it "was a little more detailed than in the original typed note". He added: “Here you were saying that you recalled he’d also admitted to you he had seen allegations of sexual abuse contained within the draft report. When did you remember that?”

The councillor said "his mind went back" during the police questioning.

'During the course of the interview, Richard Farnell gave conflicting accounts’.

He asked Councillor Joinson: What did you mean by that?”

He replied: “The conflicting accounts were the press releases said he didn’t see anything and obviously he offered the information that he’d seen the draft report. That was a conflict.”

The inquiry heard that Councillor Joinson then spoke to Peter Williams, then deputy leader of the council, because he “felt there was a conflict there that needed to be resolved”.

The inquiry heard that Councillor Joinson volunteered to talk to police officers as part of Operation Clifton in October 2014.

The inquiry was told of political infighting between Colin Lambert and Richard Farnell and how it was alleged that the note was ‘fabricated’ to ‘politically damage Councillor Farnell.’

Councillor Joinson concluded: “I did not invent anything.”

He was asked if Councillor Farnell was lying and responded: “I don’t like to use that word but he’s probably not telling you the truth.”

He said that Councillor Joinson's account of the purpose of the meeting being to discuss which councillors would fill positions on various subcommittees and various panels was incorrect. Councillor Farnell said the names of the councillors who would fill the positions had already been confirmed the week before at a council meeting on 4 June, and council minutes of the meeting (which can still be viewed on the Rochdale Council website) confirmed this was the case.

Councillor Joinson has not responded to an invitation to comment further.