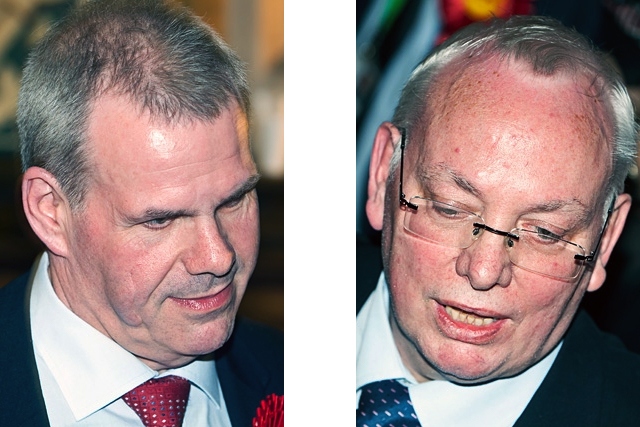 The bitter dispute between Council Leader Richard Farnell and his Labour Party colleague Councillor Peter Joinson has escalated further following Councillor Joinson's allegations that Councillor Farnell told him he had seen a key report about the Knowl View scandal while Leader of the Council back in the early 1990s, which contradicted Councillor Farnell's repeated statements that he did not see the report.

In an interview with the police in 2014, Councillor Joinson said he had met Councillor Farnell on 11 June 2014 in his role as Labour group chief whip. He said he met the newly elected Council leader to "go through various group positions" and went on to question him about his knowledge of Knowl View following reports on Rochdale Online.

Councillor Joinson said Councillor Farnell told him he had seen a draft report which detailed the abuse going on at the residential boys' school.

In his evidence at the inquiry into allegations of the sexual abuse and exploitation of children at Knowl View School on Tuesday, Councillor Farnell vehemently denied Councillor Joinson's claims, accusing him of lying.

On Wednesday, Councillor Joinson gave his evidence to the Inquiry and when questioned said that the "primary purpose" of the "pre-arranged meeting" was to discuss Labour group appointments to "minor positions in various subcommittees and various panels".

Councillor Farnell disputes this, he says that it was at a Labour group meeting annual meeting on Monday 2 June 2014, a week before his meeting with Councillor Joinson, that appointments to all the various positions were agreed by the members of the Labour group. Those appointments were ratified at the council meeting two days later on 4 June and council minutes of the meeting confirmed this was the case.

Speaking to Rochdale Online, Councillor Farnell said: "So why did Councillor Joinson see the need to arrange a meeting to discuss group members' preferences for the various council positions when it had all been agreed by the Labour Group and subsequently approved by the full council meeting the week before?

"If he was so wrong on the purpose of his 11 June meeting, just how true is Councillor Joinson's evidence about what was said at the same meeting about Knowl View?"

He added: "The tragedy of all this is that we should be concentrating on the young victims and making sure they get justice, not on Joinson's claims."

And further escalating the war of words, he went on to say: "It's now clear to me he gave a false statement to the Police and to the Independent Inquiry and that is a serious matter."

Asked to respond, Councillor Joinson says that whilst the majority of positions were indeed agreed on at the Labour Group meeting, and subsequently ratified at the council meeting two days later, there were "a couple of minor positions still to be filled" and it was those roles he met with Councillor Farnell about.

He told Rochdale Online: "The main and the majority of positions were filled at the Council meeting on 4 June, however there were a couple of minor positions still to be filled and to an outside body, the Appointed Governor role on Pennine Care NHS Trust. The Governor role is one I held (and still do) and wished to continue with that.

"I am disappointed that Councillor Farnell is denying a meeting had taken place and, more importantly, to use this to further obfuscate the main issue that he had offered to me the information that he had seen a draft report.

"There should not be any issue for Councillor Farnell here, he had seen a draft report, lost his seat and therefore the leadership of the Council. The responsibility for taking this issue further was therefore in the hands of Councillor [Paul] Rowen who had taken up the position of council leader and not Councillor Farnell. That is all he had to say in any press release he gave in June 2014 prior to our meeting and this particular part of the wider issue would not have occurred."