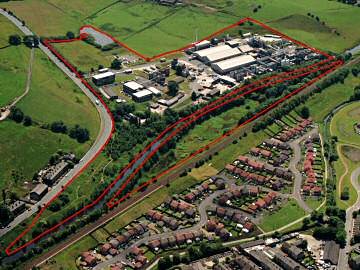 The Akzo Nobel site prior to demolition

The former Akzo Nobel site in Littleborough has been purchased by the government’s Homes and Communities Agency, believed to be in an attempt to kickstart housing plans.

Plans for 174 residential homes on the former Akzo Nobel site were approved in January 2015, despite objections from local residents.

The development of the Akzo Nobel site, which links Littleborough town centre and Hollingworth Lake, has been controversial with concerns consistently raised over contamination and the location of mine shafts.

Since plans were approved, the project has ground to a halt with no progress undertaken on the site by developer Countryside Properties, which submitted the plans at the former chemical plant towards the end of 2011.

Now the Homes and Communities Agency has purchased the site, believed to be with the intention of building the approved houses.

In 2005 Belway Homes withdrew plans to develop 280 homes on the site when members of the public responded with fears of contamination and the pressure that the development would put on Littleborough as a town.

Their plans for approximately 164 homes plus commercial and leisure facilities were also dropped.

The Homes and Communities Agency has been contacted for comment.