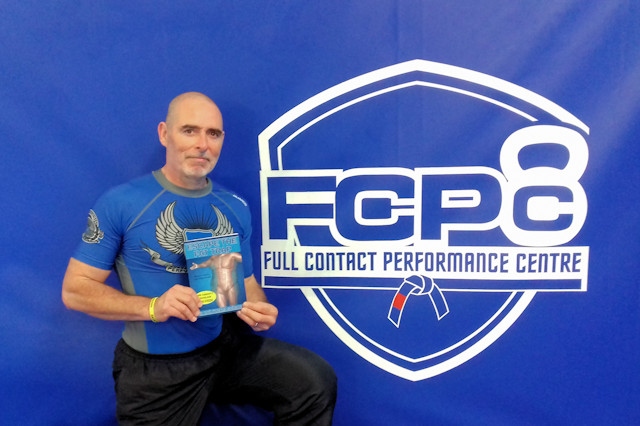 Rochdale scientist Dr David Penney has written a book entitled ‘Escape the Fat Trap’ after transforming his figure and losing a third of his bodyweight.

Just a couple of years ago Dr Penney, 49, had an expanding 46-inch waistline and had never entertained the idea of joining a gym. Just seven months after stepping through the doors of Full Contact Performance Centre in Rochdale, he had dropped to a 34-inch waist, lost around one third of his bodyweight and – several months later – had a six-pack that would put most 20 to 30-year-olds to shame.

He said: ““When I started, I had no significant weight loss aspirations and had no idea what I was doing.

“I used my skills as a scientist to thoroughly research all elements of the process, from training to nutrition and mindset. It soon became apparent that there is a lot of conflicting information out there, geared mainly at maintaining a very lucrative health and fitness industry, rather than aimed at solving the current obesity problem. The reality is, once you manage to sort the wheat from the chaff, what is required is actually very simple indeed and just about anybody can do it.

“Ultimately, what it comes down to is eating a good balanced diet along with gradually progressive strength training. based on standard compound barbell lifts. That is it: it's not rocket science.”

The father-of-three continued: “Once I had realised this, the process was easy and I was so surprised at the results, I decided to write a book about how to do it.

“Most overweight people have a fixed mindset with regard to what they believe they can realistically achieve in terms of weight loss. This is absolutely wrong, but it stops most people even getting started. My book promotes the ideas of hope and possibility by focusing on the process rather than too much on the end result. This serves to transform a fixed mindset into a more progressive one, and once that has been achieved, anything is possible.”

Andy Tyson, former Royal Marines Commando and Marine Fit Coach and PT at Full Contact Performance Centre, said, “I have witnessed David's progress and amazing transformation from day one – and he is now my motivation.”

Dr Penney, who is an Honorary Lecturer in the Faculty of Life Sciences at the University of Manchester, added: “Not only do I have a better physique than ever before in my life, I am also significantly stronger. I had never previously been able to lift my own bodyweight, but I can now knock out 20 chin-ups with relative ease.”

Next year, Dr Penney will begin competing as a Masters two powerlifter where he hopes to make ‘a significant impact’ on the north west scene, and maybe even nationally.

He concluded: “I cannot thank the staff and members enough for providing the relaxed and friendly environment that allowed me to achieve what I have at Full Contact Performance Centre.

“This is the most rewarding thing I have ever done, but the best part of it is that I now have a much better quality of life with my young children, who also now understand the importance and benefits of good balanced nutrition and exercise.”

Escape the Fat Trap: it’s not rocket science is available in paperback and e-book (including Kindle) formats.