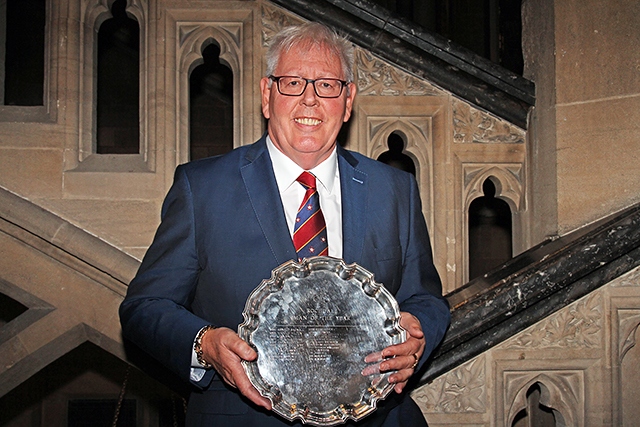 Rochdale’s singing jeweller John Swinden was named the Man of Rochdale 2017 at a luncheon at the Town Hall on Friday (24 November).

John has raised thousands of pounds for charity over the years, raising well over £6,500 through his June concert and barbecue alone earlier this year, and even presenting Springhill Hospice with a cheque for £1,000 at the start of the announcements. A second cheque of £1,400 from Graham Jackson was also presented.

John, who runs J&D Alexander on The Walk, was presented with the plate bearing the names of all previous titleholders by last year’s Man of Rochdale, Alan Wrigley.

There were 39 nominees for the title, including Ben Boothman, Paul Ellison, and Jimmy Cricket.

Councillor Robert Clegg OBE, Chairman of the Committee, announced John as the winner, saying: “It is a struggle to know what to say as I was surprised not everyone on the committee had heard of him.

“However, there was a little clue as he gave me a cheque for £1,000 earlier and he clearly had no idea.”

The jeweller was first nominated last year for the title, and was clearly overwhelmed by the announcement – as the 24th Man of Rochdale since the event began in 1994 – as emotion overcame him.

Gathering himself, John said: “I am honestly gobsmacked. There are so many others who deserve this other than me. All my life I’ve tried to be a better man. I do have a given feeling that my heart has always wanted to go in the right direction to help others. God bless you all.”

John added: “I have always felt blessed to be in a position where I can do what I do and have the time and motivation to want to do it. If I were a multi-millionaire, I would give every penny to charity.

“I have always wanted to sing and I only started in the last five or six years. I always thought and prayed if I could sing and make money, I can help more good causes. It has helped tremendously, and I am a firm believer in what goes around comes back ten times more.”

Mayor Ian Duckworth said: “Congratulations to our singing jeweller. I have bought jewellery from John and heard him sing, so this is a new role for him now. Very well done to him and I wish him all the best.”

Tony Lloyd MP for Rochdale said: “It is really well deserved as John gives of himself to the town and things that matter in Rochdale. It is nice to see recognition by this great award.”

Nominees and their guests were treated to a decadent four course meal and entertained by Liverpudlian comedian, Paul Boardman, who was guest speaker this year. Toastmaster was Alan Calow.