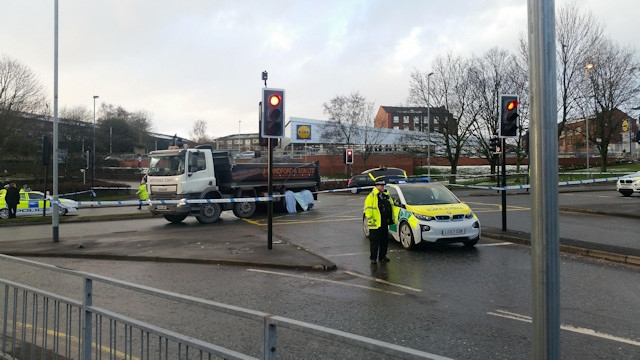 The scene of the collision at the junction of Spotland Road, St Mary's Gate and Hunter's Lane

An investigation has been launched into the circumstances surrounding a man’s death and a referral to the Independent Office of Police Conduct has been made.

Shortly before 3.50pm on Monday, PCSOs were on patrol in Rochdale town centre when the man appeared to have seen them and made off onto Spotland Road, where he was involved in a collision with a HGV.

Ambulance attended, but the man was pronounced dead at the scene.

The man has not yet been formally identified.

Sergeant Lee Westhead of GMP’s Serious Collision Investigation Unit, said: “We have launched an investigation into the man’s death and the circumstances around this tragic collision.

“We are doing all we can identify who this man is, so that we can speak to his family and give them the support they will need through this difficult time.

“If you were in the area this afternoon and saw something that could help with our enquiries, please contact us as soon as you can.

Reports can also be made anonymously through the independent charity Crimestoppers on 0800 555 111.