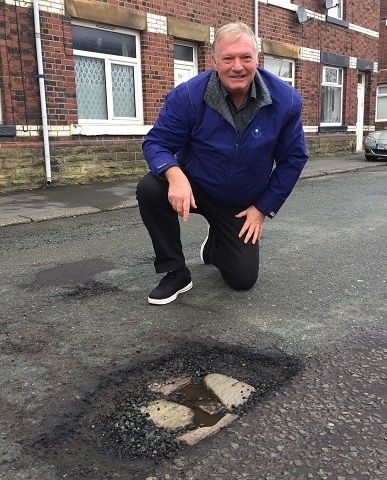 Following the launch of his 'Repair the Roads' campaign in January, Milnrow and Newhey Labour councillor Neil Butterworth has thrashed out details of a new scheme with the Leader of the Council Allen Brett that will see £12 million spent to repair the borough’s roads and footpaths.

After the pothole campaigner encouraged residents to complain to their local councillors about the state of the borough’s streets, he received hundreds of responses from the public.

Councillor Butterworth said: “The state of the roads is the number one complaint by the public. I am pleased the Council has listened and is now going to invest the much needed millions to start putting things right.

“The £12M will not repair every road but it will go a long way in catching up on decades of under investment.

"I am now working on repeating the investment once the initial two year programme is completed.

"We are only one of a handful of councils nationwide that is significantly increasing the amount of cash spent on highway repairs.

“It is common sense really. Putting the roads right now will lead to cheaper maintenance costs in the future and fewer expensive legal claims for injuries and damage caused by potholes.

"We will soon have the best roads for miles around.”

Councillor Brett said: “We know that bread and butter issues, like the state of the roads, are really important to our residents. That is why we have taken this step to enable us to drive through these massive improvements to our roads and footpaths."

Whilst the scheme is subject to formal approval by the full council, in reality that is a formality given the large Labour majority.

Councillor Brett added: “The full council will vote on whether to approve this spend next week, and if they agree, our highways team will start creating a hit list of roads and footpaths we would like to target, using information from network condition surveys and site visits, among other things. These lists will be put together with support from councillors across all the different wards, who know their areas very well and are in regular contact with our many residents who use the roads and footpaths on a daily basis.”