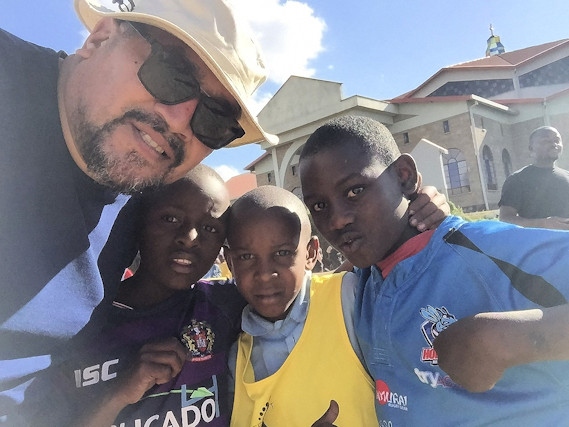 A former professional sportsman-turned-actor has returned from the Kenyan plains after flying out to coach sport and film for a documentary.

Danny Ligairi-Badham, who lives in Rochdale, flew out on 8 February to film and coach sport as part of his Barefoot Project, which supplies suitable footwear and provide opportunities for youths in Kenya and Fiji.

Danny, who has travelled the world for over 20 years coaching sports, explained: “As a former professional sportsman in a number of sports, we as athletes need the correct equipment and clothing to achieve our full potential: but what if your correct clothing was a pair of patent, slip on shoes that your daughter would wear to school, some leggings with holes in, an odd pair of sports shorts?

“The only thing that is the same is the passion and heart they share, the tenacious tackling and spirit of just being grateful of being allowed to play.

“The other thing that grasps you is that three of the young girls have been inspired to play and get away from the FGM risk within their culture. It’s shocking on all aspects, but the heart and passion is strong. These children love the sport and opportunity they get: they thrive on being able to play the game of rugby.”

He continued: “The boys’ issues are of responsibility and a matter of the norm in their growth, help, work, support the family or end up homeless and ill. When you see that some of them have walked two to three hours to come learn how to play or coach and have holes in their footwear, you start to get a complete understanding of what you are seeing.

“The final experience involved a young boy of 16 who’d been up since 5.30am. He had walked a few hours to try get a lift to cross the ‘Rift’ of Nairobi to attend a training session. I asked him what size feet he had and he replied he was a seven. I looked unsure and as he took his shoes off, his big toe was crossed with his other toe, and they were squashed. I asked him to place his feet flat and uncross his toes. He was actually a size nine and didn’t have any other footwear. He had spent the last few months wearing what he could afford or get.”

The 12-day visit included club, schools and team coaching with an eye-opening visit to the slums outside of Nairobi. Whilst over there, the former sportsman was able to develop a programme for the young coaches to work with those even younger.

Danny, who made his acting debut in 2017, added: “Visiting slums and open land gave me a further eye opener, dangerous toxic smoke from a dump next to a school of 1,200 surrounded by people’s homes then a glorious building, brick and solid foundations, a Catholic church. The stark contrast of the surroundings re-enforced my idea of Barefoot Project, supplying suitable footwear and inspiring young coaches to learn how to utilise the surroundings to coach and provide opportunities to the younger children.

“The only ones that will benefit are the ones who are wearing it. The boxes and supply of shoes will be passed over directly to those there and then. The project doesn’t ask for money, we ask for suitable old trainers or football boots which are then separated, the firm ground boots, football and hockey trainers for Kenya and the multi stud and hybrid boots for Fiji’s softer ground.”

He said: “I was invited into the families’ homes and working closely helping the kids gain any opportunity they get. There was one moment when we were filming in the middle of nowhere with the Rift in the background and 40 kids playing rugby in a cleared area, then the camera panned right and two Maasai shepherds were stood watching from about 200m away with goats walking around them. Suddenly they just disappeared.”

The filming is set to be part of a documentary centred around the project, which supports the opportunity of bringing four boys from Fiji and two from Kenya to experience European culture and education for three months.

The former rugby and basketball player added: “The boys have come from literally nothing and have been given an opportunity to study for three months and play sport. None of them had passports in December and we arranged visas, flights etc. Think of the scene in ‘Cool Runnings’ when the Jamaicans arrive at the airport to snow and freezing winds: it’s been like that so far for the Fijians and the Kenyans.”

Danny supplemented: “The kids I see each week here in mainland Europe and England all know the values of appreciating what they have and what others don’t have. My sports background was very diverse and when you take the knockbacks you have to continue in what your ambition is; the biggest lesson I learned was ‘keep on going.’

“These children have nothing, and I hope to give them every opportunity in life. Making a difference stands strongly in my values and the Kenya trip is really the reward, not just for myself, but for all those I meet out there. We had two cases full of boots to distribute to the children and some educational materials donated by local teams in Rochdale.”

The visit will be documented ready for tv production later in the year.

The actor has also been approached about a seven-part series with Amazon and is also set to feature in a documentary about his journey to find out more about his famous Fijian father, Ilisoni Ligairi, a former SAS major.

Danny made his screen debut in Tom Hardy’s BBC One drama, Taboo, playing the role of Polynesian sailor Martinez, four years after he was discovered by Hardy, whose dog interrupted an U14 rugby session Danny was coaching in a London park.

Since his rise to stardom, Danny, who was born in Hereford, has also become an ambassador for Adoption UK. He himself was adopted when he was one by a couple from Worcester. Danny moved to Rochdale in 2001 where he met his partner, Nina Ratu, and they have three children.