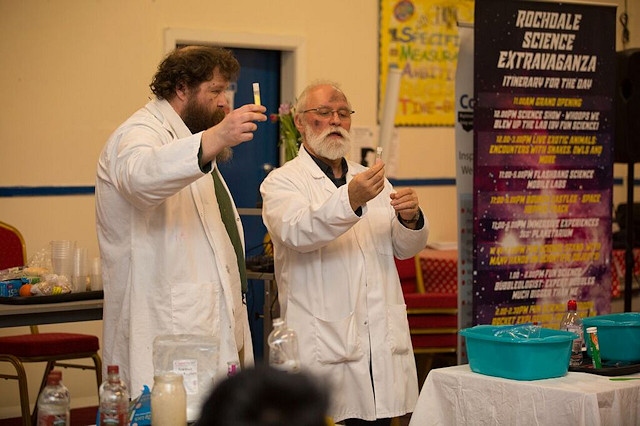 Labib Rahman, 11, who organised the event said: “People still showed up all across Rochdale, coming down to celebrate science, and it was great seeing everybody having fun and learning a couple things too. The weather tried getting in the way, hindering it by snow and bitter cold, but with the community’s support, and loyal friends and family, the event pushed through and it was amazing.

“Thank you everybody for making this event happen.

"Hopefully 2019, will be even bigger and better, and free of weather problems.”

Labib’s father, Mohammed, said: “The show had to go on. I am truly humbled by the eventual turn out. I think we've established something that could potentially turn in to something big for Rochdale.”

Shaukat Ali , Wardleworth Community Centre chairman, said: “I want to thank our centre manager Doulot Miah for presenting and co-ordinating the event, Labib and his dad, our partner organisations, sponsors, stall providers, Tony Lloyd MP, the Mayor and Mayoress, the leader of council, ward councillors and all the residents from all backgrounds for attending today and making it a successful event.”

Mr Miah, the centre manager, said: “Absolutely fantastic event at Wardleworth Community Centre, I am very pleased to see many people turning up in the freezing cold weather to take part in this annual celebration.”

Last year Labib organised the first fun-filled family ‘science fair’ at the community centre, which was attended by hundreds of excited adults and children.

The extravaganza came about because of the enthusiastic child’s love of everything science. Labib wanted to hold a science related event because “it is miles to travel to Manchester or Birmingham, so why not do something in my town?”

Labib and his father are planning a third event in 2019, but due to the unpredictable British weather, they are considering departing from British Science Week in April and holding the event during the summer.