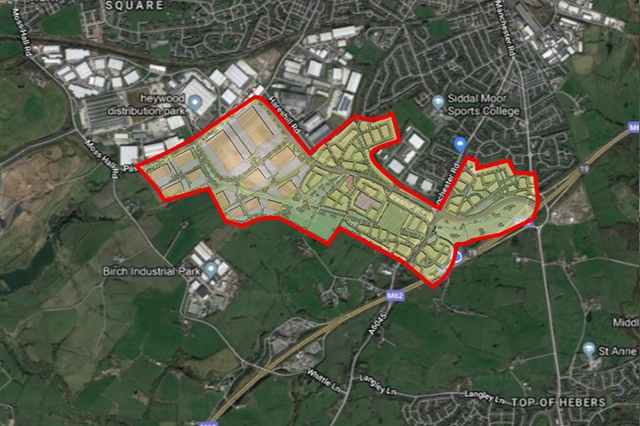 Outline of the planned development

A controversial development on private greenbelt land was approved at a two-hour planning and licensing meeting on Thursday (22 March).

The application by Russell Homes UK to develop land at South Heywood includes demolition of existing on-site buildings and structures, the construction of a new link road between Junction 19 of the M62 and Pilsworth Road, widening a section of Pilsworth Road, up to 1,000 new homes, a new primary school and space for employment opportunities.

The site is expected to take around 18 years to complete.

Following a proposal put forward by Councillor Aasim Rashid, a majority of the committee voted to approve the application as per council officers’ recommendations.

Councillor Irene Davidson voted against the plans, and Councillors Ann Stott and Pat Sullivan chose to abstain from voting.

Hopwood Hall Councillor Susan Emmott stood down from the Committee after declaring an interest, and later urged the councillors to reject the proposals. Councillor Peter Rush also declared an interest and stood down.

Speaking on behalf of the objectors, Darren Court, a resident whose land falls in the middle of the proposed development, said: “This is an important decision for a huge development, affecting not just this generation but our greenbelt landscape forever. It is about a legacy that should be focused on public interest and applied due diligence in an open, transparent and fair process. This has not happened, and we believe we have grounds for a judicial review.

Mr Court added: “Let’s be honest and clear, at best the link road benefits and dubious and unquantified and at worst they are non-existent, despite the avalanche of paperwork. Without the road, the arguments for the residential and commercial developments don't apply. Even if we accept the road is needed, the arguments for residential and commercial development are highly dubious.”

Mr Court pointed out that development on greenbelt land is against both national and regional guidelines, as well as the Rochdale core strategy. 100% of the land covered by the development is privately-owned greenbelt.

The director and planning manager of Russell Homes, Daniel Kershaw and Gary Lynch, spoke in support of the application.

They pointed out a 2014 assessment by the Greater Manchester Combined Authority would see £18 of public sector income for every £1 spent through the scheme.

They added that several national and international employers have shown interest in the site and how, if approved, they would begin to develop the area towards the start of 2019.

Speaking as ward councillor, Susan Emmott said: “When I look at planning applications, I look at the number of conditions. There are 60 on this. How many times have we sat here as a committee and the conditions have not been met?

“We were given public assurance that brownfield sites would be considered before greenbelt. We are jumping the gun with this proposal and must be concerned that it’s greenbelt.”

After the meeting concluded, Rochdale Online caught up with Mr Court, to ask how he felt now the application had been voted in, despite hundreds of objections (see video below).