Knowl View: 'There was no deliberate cover-up', Independent Inquiry finds 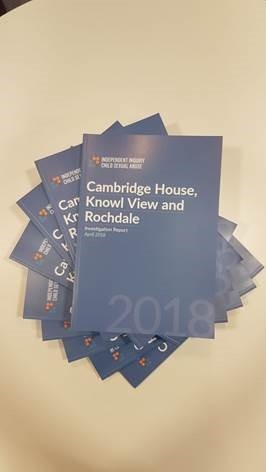 The findings of the Independent Inquiry into Child Sexual Abuse

“There was no deliberate cover-up by the authorities of Knowl View School,” a damning report publishing the findings of an inquiry into historic sex abuse in Rochdale has concluded.

Published on Thursday (12 April), the findings outline the result of a two-week inquiry last October, which was opened by The Independent Inquiry into Child Sexual Abuse (IICSA) into alleged abuse which took place in Rochdale at Cambridge House Hostel and Knowl View residential school, when Cyril Smith was a governor.

The authors of the report state: “There was no deliberate cover-up by the authorities but a careless and wholly inadequate response to the serious sexual abuse of children at Knowl View. The inquiry found it inexplicable, professionally indefensible and extremely poor judgement on the part of a senior officer that Ian Davey, former assistant director of social services did not pursue Knowl View child protection issues in 1991, through formal child protection procedures.”

“The institution failed in its basic function to keep its children safe from harm, particularly sexual harm, both in and out of the school. Child sexual abuse involving abuse of boys by staff, and of younger boys by older ones occurred from the school’s early years. Sexual exploitation of some boys was also taking place in the town centre by men paying for sex. Some boys were also trafficked for that purpose. This continued for 20 years and was well known by staff members.”

The Inquiry concludes that staff treated the sexual abuse among the boys as ‘normal’ without differentiating between what was experimentation and what was coercive and intimidating. Sexual exploitation of Knowl View children at Smith Street toilets was known from at least 1989. Boys as young as 11 were not seen as victims, but as authors of their own abuse.

The IICSA also found that three reports commissioned by Diana Cavanagh, former director of education, who independent reviewed the sexual abuse allegations at the school, were “flawed”. “There appeared to be no urgency by senior education officials to address the problems of sexual abuse at the school. No confirmation of effective liaison between Rochdale’s departments of education and social services about Knowl View reflects badly on the-then directors of education and social services and exemplifies some of their failures of leadership.”

With regards to the 1992 report by consultant clinical psychologist Valerie Mellor, the authors found that “it was difficult to believe this had not come to the attention of at least some members of staff.”

“From 1989 onwards, the police, Rochdale council’s social services and education departments and Knowl View staff knew that children from Rochdale were being subjected to sexual exploitation for money in public toilets. There is clear evidence that the police and social services knew a group of children were victims of organised abuse in Manchester.”

Speaking about events at Cambridge House, the report states: “Cyril Smith showed considerable, perhaps unduly detailed, interest in the decisions of children in care as his political career developed. There does not appear to have been any inspection of Cambridge House by the Council before the first child in care was placed there.

Referring to the former MP, the report notes: “it is difficult to understand why Smith thought his role permitted ‘medical examinations’ when he was not medically qualified.

The report went on to say “the Lancashire police investigation in 1969-70 was comprehensive and police were not improperly influenced by Smith or others. The Inquiry does not suggest that there was a cover up or conspiracy in the way Smith obtained his knighthood. No concern was expressed for the boys who made allegations but there was discussion about whether it would be fair to refuse him a knighthood.”

Regarding the speculation of a Labour-Liberal Democrat ‘pact’, the report said: “On this issue, we accept Mr Farnell and Mr Rowen’s evidence. There would have been no reason for the Liberal Democrats in particular, to make a deal with Labour in relation to Cyril Smith about allegations that had already been put into the public domain in 1979. Nor would it make sense for Labour to make a deal in relation to a relatively low-profile Labour councillor in return for keeping quiet about Cyril Smith, who was far and away the most high-profile Liberal politician in Rochdale for decades.

“We suspect that the idea of a pact gained credence because the alternative – that people knew about the serious allegations surrounding Cyril Smith, but chose to disbelieve or ignore them – was even more unpalatable.”

“We concluded that the police did not turn a blind eye to the sexual exploitation of boys in Rochdale town centre. Such records that are available suggest that the police knew children were being exploited in the town’s public toilets but did not obtain sufficient evidence to prosecute. The records that survive do not, however, provide any satisfactory answer as to why, despite some disclosures on the part of the boys and despite knowing their names of some men, police do not appear to have charged anyone with the sexual abuse of Know View pupils in the town centre.”

The 147-page report also concluded that then-leader of the council, Richard Farnell, lied to the Inquiry during evidence, noting it “was shameful that he refused to accept any personal responsibility for the young lives blighted by what happened when he was leader.”

The authors added: “The issues that have come to light and the conclusions we have reached in this report remain of potential relevance today. However, as we will be considering evidence that is relevant to the protection of children in the care of the local authorities in the outstanding local authority investigations, we will be better placed at a later time to consider the making of overarching recommendations arising from this and any or all of those related.”

Leader of the Liberal Democrats, Councillor Andy Kelly said: “I welcome the findings of this inquiry. I accept its conclusions and recognise that there has been a catastrophic failure to protect the safety of young people in Rochdale. There has also been a massive failure in political leadership in the Borough and the time to change that is long overdue.

“Action has to be taken immediately. There needs to be a blunt and transparent process of confronting the past otherwise we will never heal those scars or regain the confidence of the general public, or the reputation of Rochdale itself.

“I expect Rochdale Labour to expel Councillor Farnell immediately and there needs to be an internal investigation in the Labour party as to the actions of the current leadership who categorically backed Farnell in December.

“Let us not forget that ultimately this about the failure to safeguard children in Rochdale. We need to create a future where young people- both in the care of their families or the local authority- are safe from harm. My heart goes out to those (now adults) who have suffered as a result of these shortcomings.”

Councillor Ashley Dearnley, Leader of the Conservatives said: “It is important that we take on board all findings from the report and work hard with council and its partners to protect our children now and in future.

“As a Conservative group and as a council, we have apologised for past failings and we now need to move forward to ensure this is never repeated.”

Assistant Chief Constable of Greater Manchester Police, Debbie Ford said: “GMP welcomed this inquiry from the beginning as it publically scrutinised these difficult and complex issues.

“We have fully cooperated throughout and, today, we acknowledge its findings.

“This is a comprehensive report and we will now take time to fully understand the outcomes and any potential learnings. GMP will look to consult with the Inquiry in relation to any possible offences.”

Assistant Chief Constable of Lancashire Constabulary, Tim Jacques, said: “We welcome the publication of today’s report and thank Professor Jay and the inquiry panel for the opportunity to appear before them.

“First and foremost, our thoughts remain with any victim of child sexual abuse past or present and we will continue to seek justice for them, without fear or favour and regardless of the status of any alleged offender.

“Lancashire Constabulary was responsible for policing Rochdale between 1969 and 1974. In October 1969 an investigation commenced into allegations that Cyril Smith had sexually abused a number of child residents of Cambridge House Hostel of which he was a trustee.

“This investigation was described by the barrister acting for those making the allegations as ‘exemplary, thorough, fearless in the face of threats, intimidation and obstruction by Cyril Smith and his political allies,’ and in her view was ‘characterised by an enlightened understanding of the dynamics of the power/vulnerability imbalance which silences victims.’

“The inquiry similarly concludes in today’s report that the investigation was ‘a thorough and searching examination of the allegations against him (Smith)’ and that at no point were the police improperly influenced by Smith or others. In fact the report stresses that the officers involved were ‘plain in their view that Smith ought to be prosecuted’.

“It was the director of public prosecutions who took a contrary view. This hopefully should put an end to years of rumour and speculation that our investigation was anything other than professional and competent.

“The investigating officers acted in the highest traditions of Lancashire Constabulary and I remain proud of their actions and those of all our officers who continue today to protect the most vulnerable in society. Lancashire Constabulary and the police service generally will continue to work with all relevant partners to learn and improve our collective response to any allegation of child sexual abuse.”

Paul Rowen had not responded to an invitation to comment at the time of publication.