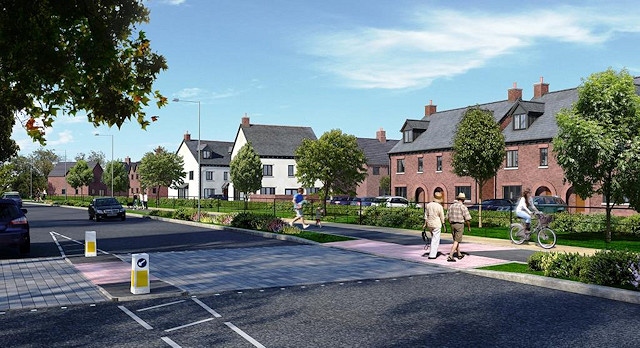 How the site could look

Plans for a new link road just off junction 19 of the M62, which will help to create thousands of new jobs and homes, have moved up a gear following the decision by the secretary of state not to call in the planning application.

The proposals, which involve the delivery of 1,000 new homes, 1.5million square feet of employment space and a new primary school over the next 18 years, were referred to the secretary of state by Rochdale Borough Council after its planning committee approved the application by Russell Homes last month.

The decision brings millions of pounds of investment into the borough of Rochdale, including funding already allocated to the new link road. The Greater Manchester Combined Authority is to contribute £10.3m to the project and Highways England has committed a further £1.75m. The remainder of the cost will be met by the developer.

The scheme is estimated to be worth £175m per annum to the local economy once complete, and is set to bring around 2,800 FTE (full time equivalent) jobs, including 2,300 located at a new business park set to be developed, plus a further 180 temporary construction jobs each year during the build. Around 100 FTE jobs could be supported by small scale retail uses on the site and the scheme could support a further 450 gross FTE jobs across the borough.

The benefits of the new link road will be felt by the local community as well as the numerous logistics businesses already located within the borough, with significant traffic taken off local routes. Vehicles accessing South Heywood Distribution Park will no longer have to travel through Heywood town centre or up to Simister Island and onto the M66 motorway. This will save approximately 4,700km per day in business travel, which will generate a financial saving of £25.7m million in vehicle operating costs over a 60 year-period. It will also significantly alleviate congestion in Heywood town centre, with business traffic often using the area as a cut through.

A primary school will be created at the site, alongside eight hectares of public open space and a multi-use games area. The developer will also plough more than £1m into local bus services and new bus stops.

The link road is expected to be complete by 2020, with the business park and homes due to follow. Full site completion is expected in 2036.

Daniel Kershaw, Russell Homes director, said: “This decision is great news for the economic future of this area. The development will, over the next 18 years, see around £400million invested in the delivery of new employment space, homes and community facilities and, crucially, the Junction 19 link road which will unlock all of that potential.

“The economic impact of the new route cannot be underestimated. Improving journey times makes South Heywood even more attractive for firms looking around the Manchester motorway network for the best place to locate their operations, and it removes one of the biggest barriers to growth for existing businesses. We have already had significant interest in the space available. Now this decision has been reached, we can progress negotiations with occupiers which have the potential to bring many thousands of new jobs to the borough.”