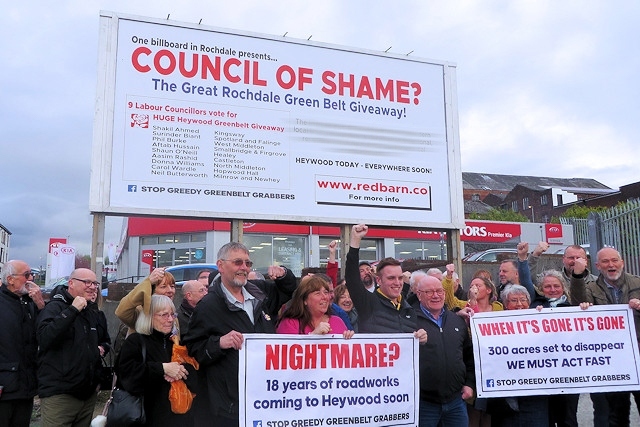 Protesters with the billboard

Protesters paid for a billboard in Rochdale town centre in protest at a controversial planning appoval on greenbelt land in Heywood.

Erected at the car park near Molesworth Street on Thursday (26 April), the board proclaimed: “One billboard in Rochdale presents Council of Shame. The Great Rochdale Green Belt Giveaway!”

The board refers to a controversial plan for a new link road at junction 19 of the M62 and up to 1,000 new homes,  and named nine Labour councillors who voted in favour at a meeting in March.

It was given the green light by the Secretary of State, who chose not to call in the application.

Darren Court, the organiser, said: “I’m proud to live in Rochdale but felt ashamed of my local authority and the elected officials who ignore the people who elect them.

"Today the issue is how they unashamedly forced through a green belt development they have wanted for years, but it’s much more than that for me. It’s about how they seem to think they can do what they want... and that’s why there is just one billboard in Rochdale that highlights their shame."

The billboard was quickly removed following representations from the Council to the site owners.

Steve Rumbelow, chief executive of Rochdale Borough Council, said: “This billboard is misleading and inaccurate. When deciding on this application, our planning committee followed proper guidance. The council referred this to the Secretary of State, who carefully considered the case and decided not to call the application in. This is a clear indication that the government thinks that the council properly considered the application before reaching its decision.”

Mr Court said: "We knew councillors wouldn’t like their voting record being made public but we never expected them to use legal bullying tactics to get the billboard removed.  We feel this is a direct assault on our free speech and just another attempt of a shame-filled council to hide the facts."

Keeley O'Mara, who is standing as an independent candidate for North Middleton, said: "The green belt needs to be protected in accordance with national and local planning policies. The planning system needs a dramatic rewrite to make it a fair system, not just in favour of developers. The government needs to stop saying we are doing a 'brown field first' approach and actually do it."

Conservative candidate for Hopwood Hall, Paul Ellison, commented: "My view is that all green belt land should be fought for and I'm disappointed with how easy the local councillors have given it away without taking on-board local residents concern."

Michael Cullen, Conservative candidate for Castleton, added: "Whilst I do agree we need to build more homes, we cannot allow it to come at the expense of our environment. There are many brown field sites that could be utilised for development of new homes around Rochdale."

The application by Russell Homes UK to develop land at South Heywood includes demolition of existing on-site buildings and structures, the construction of a new link road between Junction 19 of the M62 and Pilsworth Road, widening a section of Pilsworth Road, up to 1,000 new homes, a new primary school and space for employment opportunities.

The site is expected to take around 18 years to complete.