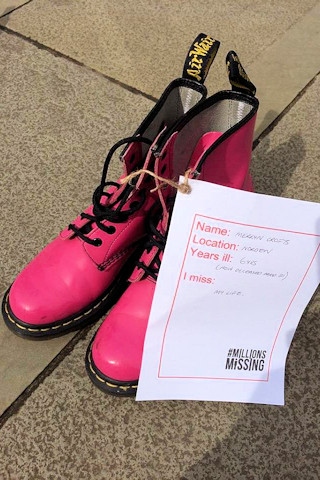 Merryn's shoes, representing just one life affected by the disease

A 21-year-old young woman from Norden who died after battling a devastating disease was just one of many represented at the Millions Missing movement in Manchester on ME Awareness Day on Saturday 12 May.

The Millions Missing movement, which falls during ME awareness week (7 – 13 May), aims to bring sufferers together by laying out a pair of empty shoes, representing the life missed due to the illness and demands change for sufferers.

Merryn Crofts was just 21-years-old when she died after a six-year battle against Myalgic Encephalomyelitis (ME), a neurological illness that causes immense and insufferable pain that affects approximately 250,000 people in the UK.

After watching her health and personality deteriorate, Merryn’s family – mum Clare Norton, sister Amy Williams and step-dad Dave Norton – are speaking out to raise awareness of the debilitating disease and change the future for other sufferers.

Despite a long battle, Merryn died just ten days after her 21st birthday in 2017. She even underwent mental health assessments, which showed her illness was physical.

Merryn’s family attended Millions Missing Manchester, placing a pair of her pink Doc Martens outside the Town Hall, which had been appropriately lit up blue. Names of those who had died, including Merryn’s, were read out before a minutes’ silence was held. Incidentally, it took place the day before what would have been Merryn’s 22nd birthday.

The ME Association lists the seven key symptoms of the disorder as post-exertional malaise or symptom exacerbation, activity-induced muscle fatigue, cognitive dysfunction, pain, sleep disturbance, ongoing ‘flu-like’ malaise, and autonomic symptoms. Of those affected in the UK, 25% are severely affected by the illness and 2% very severely affected. It affects four times as many women as men and a cause has not yet been identified.

When Merryn was 15, her face, hands and feet suddenly became severely swollen with what was originally thought to be an infection. In addition to excruciating hypersensitivity to touch, light and sound, the Oulder Hill pupil also suffered from severe migraines, brain fog, slurred speech, agonising stomach problems, and problems swallowing.

Her weight plummeted to just five-and-a-half stone (35kg) and she was also given a feeding tube before being fitted with an intravenous nutrition line. She later developed an infection in spring 2017 which meant she had to stop using the tube.

By the end of her first year of falling ill, Merryn was no longer able to walk. After a recommendation, the family went to see a specialist at a private clinic, who diagnosed Merryn with ME. An NHS ME consultant in Wigan also agreed Merryn was suffering from the condition.

Merryn’s family have set up a page in her memory, aptly named ‘Merryn’s Legacy’ (stylised as MErryn) and recently featured in a 30-minute BBC Newsbeat documentary on iPlayer, ME and Me.

An inquest into her death will take place on Friday (18 May).

Watch the documentary at: