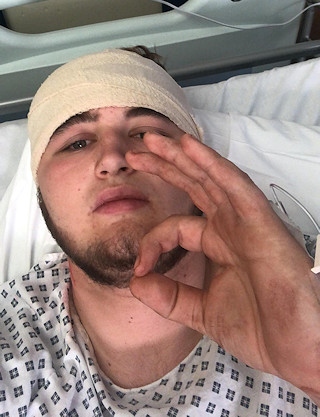 Two teenagers have been hospitalised after a vicious and unprovoked racial attack.

In the early hours of Saturday morning (2 June), Matthew Hayden and Josh Jones, who play rugby for Littleborough Colts, plus friend Zac Madden, were viciously attacked in Smithy Bridge after they were followed by four men in a dark Nissan Micra.

Following the brutal attack, 18-year-old Hayden, currently in Salford Royal Hospital, has undergone surgery for a fractured skull and suffered a bleed on the brain. Matthew could face life-long health issues as a result of his injuries. He will also be unable to play rugby for a few years and is unable to take up a recent scholarship in America.

Colts captain Josh, 18, who was driving, was unable to leave his car and suffered significant hand and facial damage whilst holding off the attackers, who were trying to beat him with crowbars through the driver’s window.

Zac, who had managed to find his way out of the back seat, was unharmed.

All three are relieved to be alive and recalled first coming in contact with the unknown attackers, described by the teenagers as ‘Asian men aged 17-21’, at the BP garage in Milnrow, where they had been minding their own business.

Sitting up in his hospital bed, Matthew said: “I got out of the car and they ran me over, but I managed to jump up onto the bonnet and got thrown off. As I was still on the floor they all got out and they were shouting ‘get the machete’ and I got scared.

“I was pleading with him not to do it and said I didn't understand why they were doing this, but he still smashed the club down onto my head and it snapped in two. Luckily, I didn't black out, but I fell to the ground.

“I could hear Zac shouting me to get up and saying they were going to run over me again, and I managed to get out of the road. I could feel the blood running down my face and front and knew it was serious: I could feel parts of the inside my head. I pointed right at him and said, ‘you've literally just killed me’.”

The Micra then proceeded to closely follow the boys along Kiln Lane and Wildhouse Lane, in an attempt to ram them off the road but without success.

Startled and unnerved, Josh tried to drive towards Hollingworth Lake when the Micra forcefully connected with the rear of his car. At the roundabout in Smithy Bridge, they were twice rammed off the road. The four men in the Micra then proceeded to run over Matthew as he got out of the car, before setting upon him with weapons including a nine-iron golf club.

During the following events, the four attackers were heard shouting racial abuse at the young lads and were fortunately halted from pulling out the machetes they claimed they had, after nurses from the Lakeside Residential scared them off and attended to the injured.

Matthew echoed the sentiments of his parents, family, friends and the club: “I would really like to thank the staff at the care home and a lady neighbour who all came out to help me. I can't thank them enough as I think they really helped to save my life.”

What is believed to be the same four men in a 2005 registered black/dark grey Nissan Micra were seen in Wardle on Friday afternoon around 6.40pm, shouting racial slurs and abuse at some teenage boys as they were walking between Wardle village and the high school.

This incident is being treated as a hate crime.

Detective Inspector Mark McDowall of GMP’s Rochdale borough, said: “The man is still in hospital recovering from this brutal assault and I hope he makes a speedy recovery.

“This was an unprovoked attack that has left the victim with life changing injuries, so it is vital that we find the people responsible for this horrendous incident.

“Even though this happened in the early hours of the morning, I would urge anyone who heard or saw anything out of the ordinary on Smithy Bridge Road, or who saw the men in the black Nissan Micra at any time, to get in touch.  They are described as being four or five Asian males, of thin build and aged between late teens to early twenties.

“Our officers will be carrying out additional patrols in the area while the investigation continues, so I would ask that you speak to them directly or ring 0161 856 8441 if you have any information.”

The boy’s family have asked for some privacy at this difficult time but have described their son as: “A caring young man.  He is always the first to help anybody in need.  He was one of the first people onto the M62 to help the stranded people during the 'Beast from the East'.

“He is loyal and caring and has a very gentle nature.  He had just been offered a rugby scholarship in America and was so excited. He is devastated that this has been taken away from him.

"We would urge anybody who has any information to contact the police as soon as possible.”