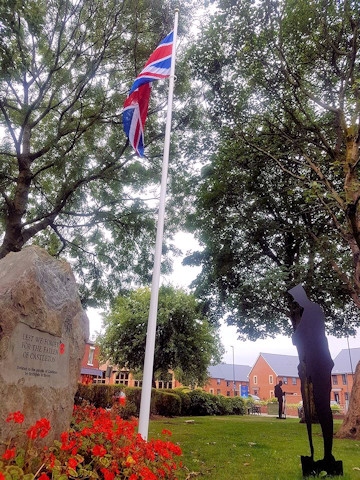 The Castleton War Memorial is now complete, following the installation of a flag pole on Tuesday (7 August).

Before June, the village did not have any memorial, but with the centenary of the end of the Great War this year, Councillor Billy Sheerin and the Rochdale In Bloom team endeavoured to put this right.

The memorial was placed on the centre of the village green by volunteers, replacing a large tree which was uprooted during the ‘Beast from the East’ storm earlier this year.

Councillor Sheerin said: “I am absolutely delighted as Castleton has never had a memorial for the fallen before. Castleton has many years of history and many of our young men fought in the wars, including my grandfather, who I was named after. He was killed in the First World War.

“We had commemorative boards in St Martin’s Church, but after the storm this year, we were left with the perfect position to install the memorial.”