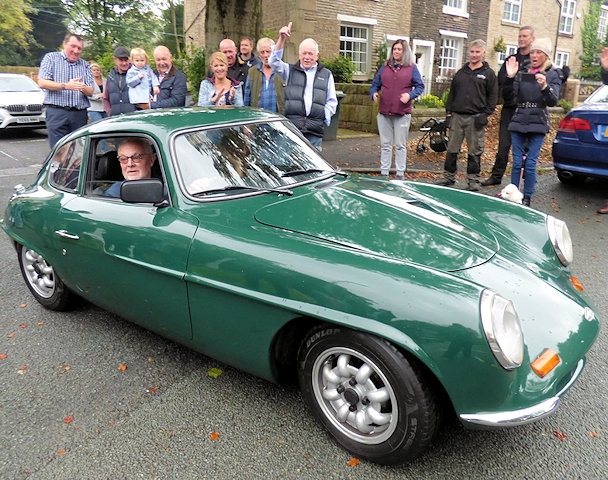 Family, friends and sponsors gathered to give charity fundraiser Martyn Butterworth and co-driver Bob Daniels a rousing send off in their 1963 Rochdale Olympic classic sports car as they set off on their 1,300-mile road trip to Mallorca.

After weeks of preparation, the scene stealer was the gleaming fifty-five-year-old, British racing green Olympic car, which got off to a strong start for the first leg of the journey, a seven-hour drive to Portsmouth and an evening ferry crossing. They are set to arrive in Palma on Friday (21st), with the five-day drive taking them through the South of France and Spain to be ‘guest of honour’ at the Club de Cotxes annual Classic Car Show at Port Adriano.

“We have taken the precaution of putting in a few spares so that we could do some running repairs on the way if needed, but she’s in great condition and we’re looking forward to the trip.”

The little piece of Rochdale’s illustrious car-making history will be due back in its home town, after its eleven-day adventure, on Thursday 27 September.

Thanking everyone for their support, Martyn added: “We are hoping to raise as much money as possible for the Hospice and we’ve made a strong start.”

All money raised will be donated to Springhill.