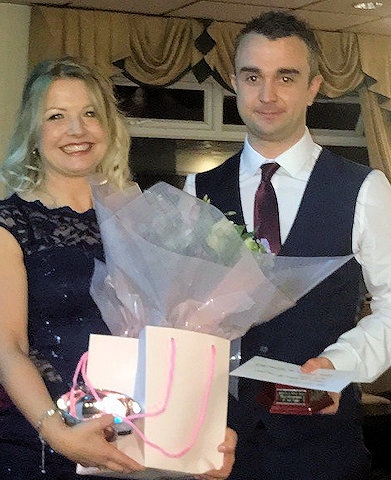 A very warm welcome was given to Milnrow Band at their Newhey concert on Saturday (13 October).

Under guest conductor Dennis Hadfield, the band was on top form at St Thomas’ Church, commencing with the march ‘Mephistopheles’, composer Shipley Douglas. Well-known as a Whit Friday contest march by many, the band played this opener with vigorous intent.

A long-time favourite of the brass banding fraternity followed.

The Musical Director proved an asset in keeping the audience informed with his relaxed style as he introduced the next item, which was ‘Bugler’s Holiday.’ Featuring six members of the cornet section in line at front of stage, this item by Leroy Anderson proved that Milnrow band has talent in depth as witnessed by the dexterity and unison playing shown here.

Having been released as a single in 1976, and staying in the UK singles chart for nine weeks, ‘Bohemian Rhapsody’ by Queen is certainly a favourite of the band and this performance was a great success with the audience.

The hymnal quality of ‘I Walk With God’ (arranged Goff Richards) was an appropriate piece for this occasion and the majestic quality of the acoustics of St Thomas’ seemed to enhance the reverence.

Prior to a well-deserved interval, all were treated to the special tones of Solo Horn player Jenny Brown, who regaled with ‘Somewhere Over The Rainbow’ from the 1939 film Wizard of Oz.

Percy Fletcher`s ‘Heroic March’ from his ‘Epic Symphony’ was the final item before the break; his Symphony was used at the Brass Band National Championships as far back as 1926.

During the break, committee members provided much needed sustenance for those present, and a raffle with numerous prizes.

The band then continued with ‘Blenheim Flourishes’ by the American composer James Curnow, which was followed by the ‘Blades of Toledo.’ A feature for the trombone section, this Spanish-influenced swashbuckling item brought Don Logie (Solo Trombone), Rachel Squibbs (Second Trombone) and Tristram Cox (Bass Trombone) into the limelight exhibiting a full blooded and rich sound.

A jazz-influenced item found its way into the programme next. ‘Birdland’ was penned by J Zawinul as a tribute to the New York night club of the same name and was arranged for brass band by Sandy Smith. One of the features of this musical masterpiece was the expertise of Chris Musgrave on Soprano Cornet.

John Ireland`s ‘Elegy’ from his ‘Downland Suite’ of 1932 was next, conjuring up the serenity and grandeur of his memories of the Sussex Downs.

The 1967 Disney film ‘Jungle Book’ gave rise to several memorable musical items, not least ‘The Bare Necessities.’ The audience was treated to an unusual pairing for the aforementioned item with the talents of the band’s Principal EEb (Tuba) player Gordon Clark and fellow EEb bass player Robert Allan, representing the film characters Baloo and Mowgli.

Several of the final musical items, such as ‘Stranger In Paradise,’ featured in the film Kismet. They owed much to Borodin’s ‘Polovtsian Dances’ and brought this magical musical two hours to a close.

After a standing ovation, the band provided ‘Radetski March’ as a curtain call.

Band President, Ken Watts said: “Everyone must be congratulated on this most successful joint fundraising venture which will benefit the funds of  both St Thomas’ Church and Milnrow Band.”