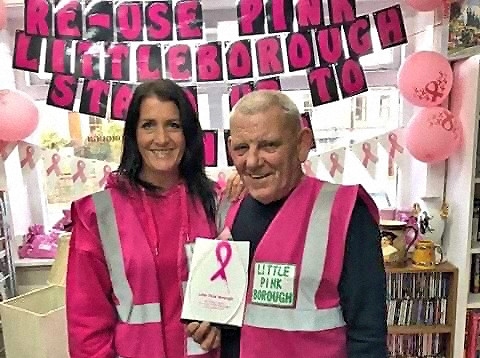 The Little’Pink’borough initiative was started by the Three Amigos Fundraising Group for their 10th anniversary in 2016 to raise funds for Cancer Research UK.

Throughout October, which is also Cancer Awareness Month, shops and businesses across Littleborough dress their window displays in pink with a trophy available for the best window.

The trophy was presented to Reuse Littleborough, which is in the process of registering as an official charity, on Saturday (20 October) by Mayor Mohammed Zaman, Councillor Ann Stott and co-founder of the Three Amigos and former Woman of Rochdale, Kath O’Donnell.

Based at the former Royal Oak Hotel, Reuse Littleborough keeps your old items out of landfill, helping change the lives of many people both locally and internationally.

Michael Bamford, who started Reuse Littleborough, said that everyone at the Hub was ‘so chuffed’ with the award, which has previously been won by Beauty Boutique (2017) and Little Gift Box (2016).

This year’s winning theme was ‘Give Cancer the Boot.’

Kath O’Donnell, of the Three Amigos, said: “The attention to detail inside the shop is fantastic.

“This year’s windows have been excellent, and the judges found it very difficult as there were so many to choose from.

“The Three Amigos Fundraising Group are extremely grateful for all your time and efforts in creating an amazing awareness against cancer, which is the focus of the pink campaign.”

Since then, they have raised well over £100,000 for Cancer Research UK.