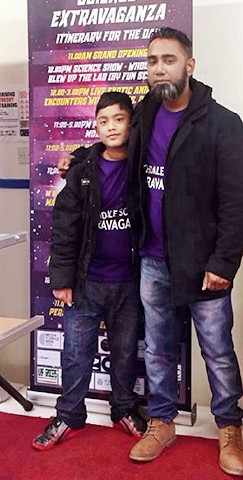 The Rochdale man who has brought the Science Extravaganza to our town for the past two years is set to become a North West community science leader, thanks to the British Science Association.

Mohammed Rahman and his son Labib, started the Rochdale Science Extravaganza in 2017, Rochdale’s first ever science-led event which has run during British Science Week in April at Wardleworth Community Centre.

The extravaganza came about because of the enthusiastic child’s love of everything science: Labib wanted to hold a science related event because “it is miles to travel to Manchester or Birmingham, so why not do something in my town?”

Since then, both events have been packed out with hundreds of local residents enjoying all that science has to offer.

The Rahmans are planning a third event in 2019, but due to the unpredictable British weather, they are considering departing from British Science Week in April and holding the event during the summer.

Mr Rahman will be attending a number of British Science Association workshop days for the community leaders programme, taking place in London in October, December, January and March.

He said: “I can't stress how grateful I am for this opportunity, and how much this will benefit not only myself, our event, but the whole of our community.

“Getting this training means that I can now finally have not only the knowledge, but also the resources to make science accessible throughout Rochdale, and not just confined in a lab.

“I hope everyone can see the benefits of this opportunity and pray that I will be able to bring a light to our community, our town, and in due course inspire future generations into science.”

He continued: “A couple years ago, a small spark of inspiration from my son Labib, and considerable amount of effort from myself, Wardleworth Community Centre and Youth Connections, a first ever science event in our community lit up in Rochdale.

“What started small excelled into our second event, and our third is pending. Rochdale Science Extravaganza could never have got this far without fellow volunteers of Wardleworth Community Centre, Youth Connections, and of course, the unconditional support of family, friends and community members.”