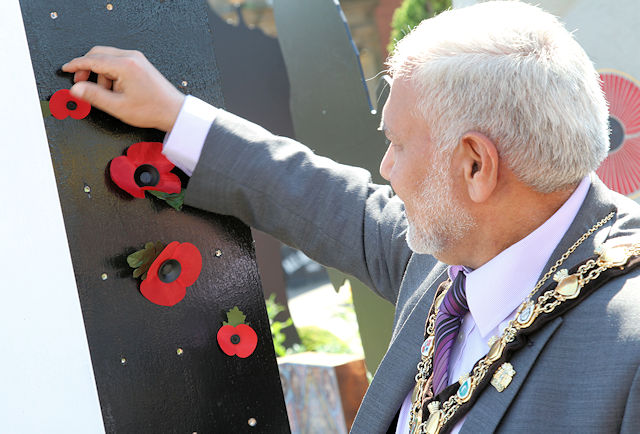 With the centenary of World War One approaching on Sunday 11 November, numerous schools, groups and organisations have created their own memorial displays in honour of those who fought all those years ago.

Residents across the borough will have the chance to pay their respects to those who have made sacrifices in defence of the country at this year’s Remembrance Day Services.

Commemorations will be held on Remembrance Sunday, with seven parades across the borough, marking 100 years since the end of the First World War.

Representatives from the Navy, Army and Royal Air Force will join veterans and civic dignitaries for the parades, which will take place in Rochdale, Heywood, Littleborough, Middleton, Norden, Milnrow and Wardle. The crew of HMS Middleton will be parading in Middleton on the day and providing a guard of honour at the memorial.

Here's our gallery of your remembrance tributes. 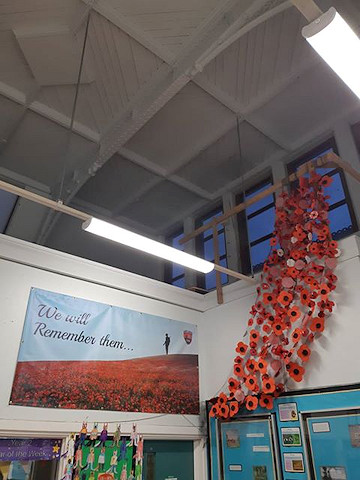 Stephen Cooney spent all summer creating his own special soldier tributes in his garden, recognising the World War One centenary, plus the 50th anniversary of the Royal Regiment of Fusiliers, which combined the Royal Northumberland Fusiliers, Warwickshire Fusiliers, the Royal London Fusiliers and the Lancashire Fusiliers. 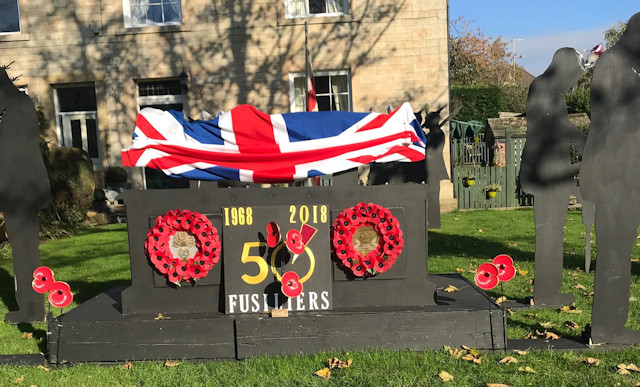 Rosso is adorning several of its buses on routes across Rossendale, Bury and Rochdale with large sized commemorative poppies to encourage its thousands of customers travelling each day to remember those who made the ultimate sacrifice for their country. 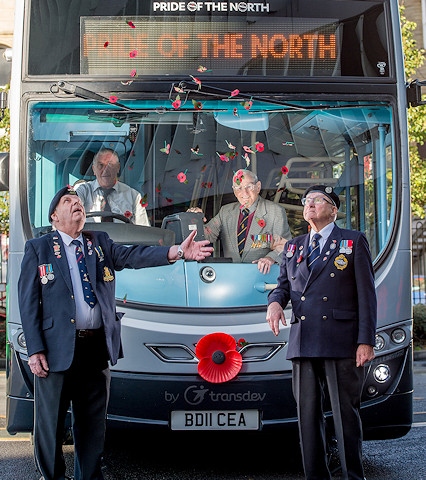 In conjunction with Town Centre Chaplain Margaret Smith, the Centre invited pupils to put together what they have learnt about World War One, and have combined their touching tributes to make a display to mark the 100th anniversary. 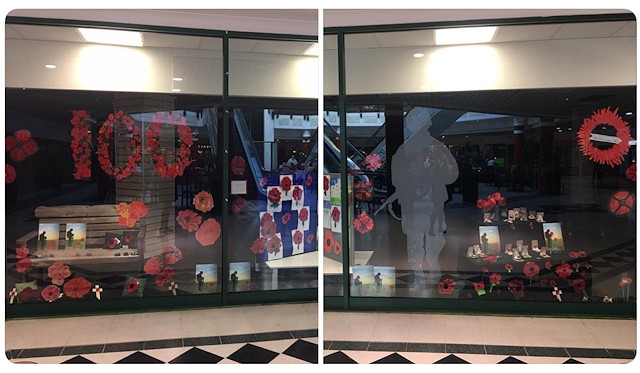 Rochdale Exchange’s commemorative poppy exhibition invited Rochdale primary schools and its young pupils to produce their own poppy-themed creations to mark the 100th anniversary the war. 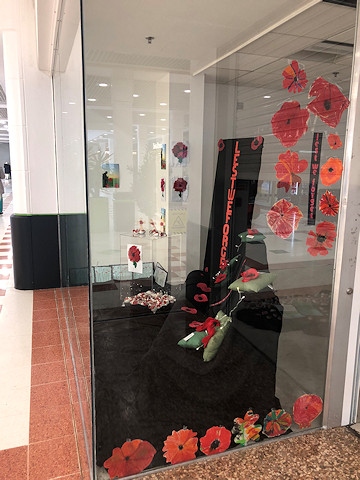 Heywood will remember them, photo courtesy of David England.

Created by Ros Liddle and Jan Eaton-Dykes, assisted by many Middletonians, this magnificent creation features two silent soldier silhouettes, plus a floral carpet of poppies around their feet as a third soldier carrier their fallen comrade. 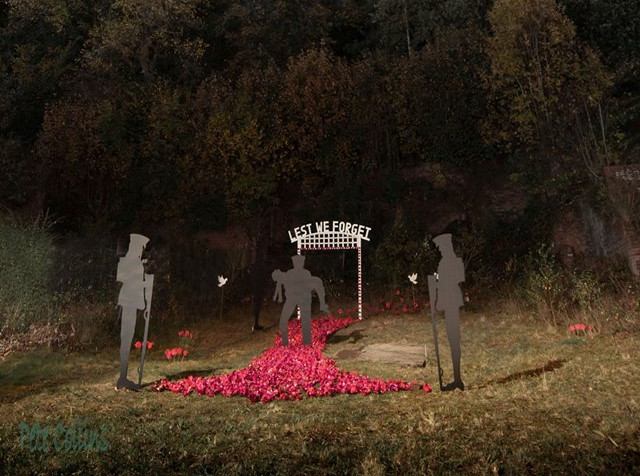 Created from 1,000 plastic bottles to represent each soldier from the 6th Battalion of the Lancashire Fusiliers who left Middleton and the surrounding areas. 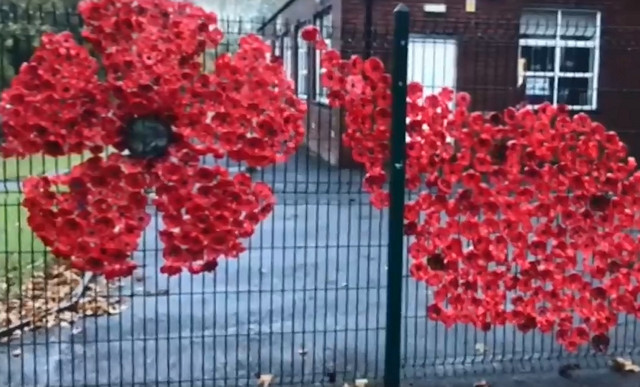 SPC Fabrications has installed this soldier silhouette on their premises' gable end. 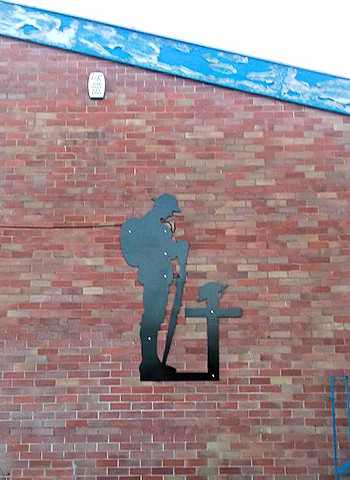 The memorial garden, a fitting tribute on The Esplanade to remember those who fell between 1914 and 1918, includes engraved poems, benches, soldier silhouettes, a picture frame aimed towards our great cenotaph and a fantastic floral display, including poppies and other symbolic plants. 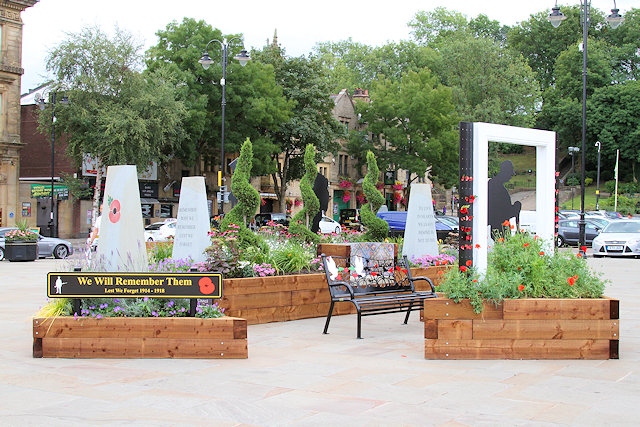 In a fitting homage, this tank cutout occupies a derelict patch of land near Kiln Lane, which incidentally housed an authentic 23-ton female Mark IV training tank after the First World War. 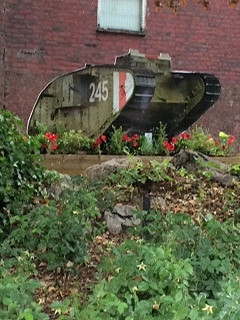 Silhouettes of soldiers have been installed at various locations across the borough watching over numerous beauty spots, including Norden and the Shawclough entrance to Healey Dell, as well as Town Hall Square.

Poppies have been erected on lamp posts across the borough on specific routes throughout 2018.

Each child made their own poppy at St Michael's, which accompy a soldier watching on. 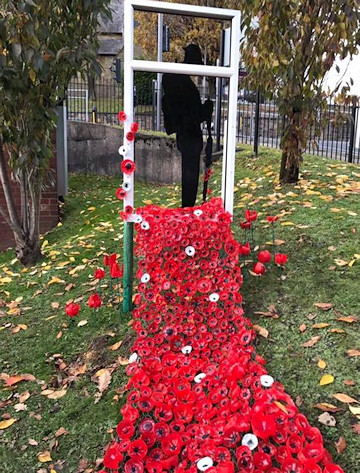 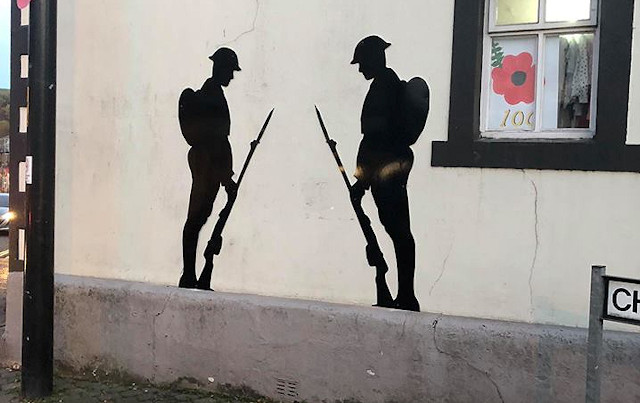 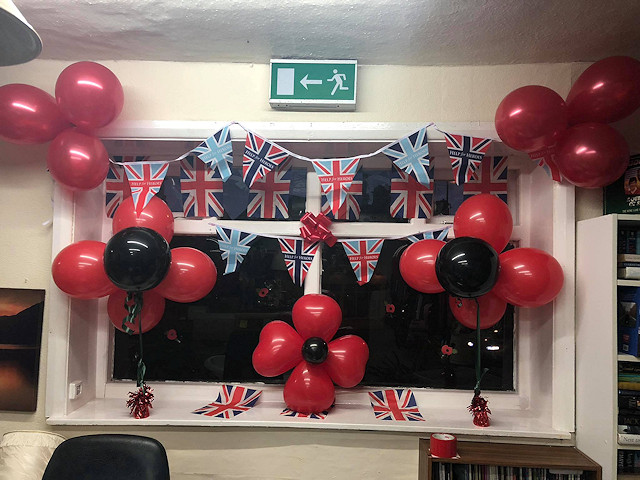 Colourful metal commemorative poppies have sprung up across Middleton, thanks to an innovative idea by Paula Hickey and Martin Cove.

The idea was borne last summer when the couple realising that there were no commemorative plaques like the blue heritage plates specifically for fallen soldiers.

A soldier carries his injured comrade outside the Parish of St Luke's in Heywood centre. 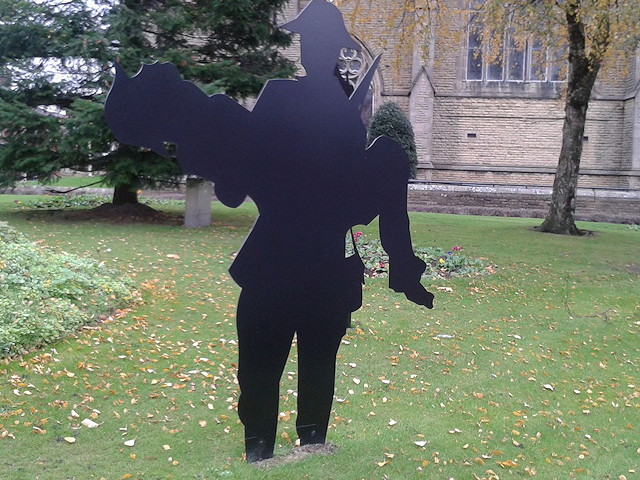 Springhill Hospice has dressed their Yorkshire Street shop with an appropriate eyecatching war-themed display for the centenary. 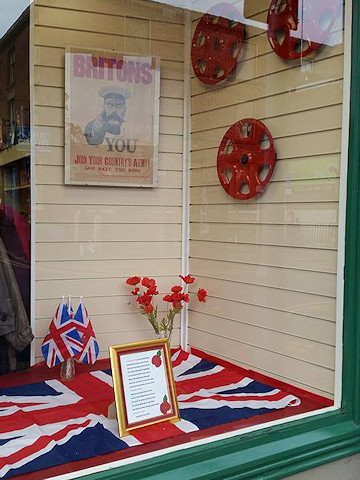 St Cuthbert's RC High School have been oganising displays both inside and outside of school to honour the soldiers and the sacrifice they made.Year 9 students have been especially busy, collecting plastic water bottles to create waterproof poppies for an outside display. 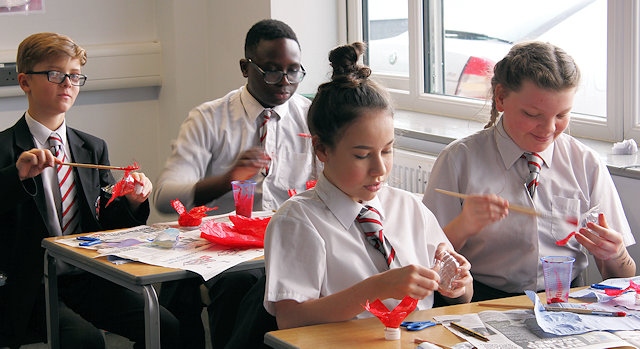 These poppy tributes were laid by local childminders and some of the children they look after. 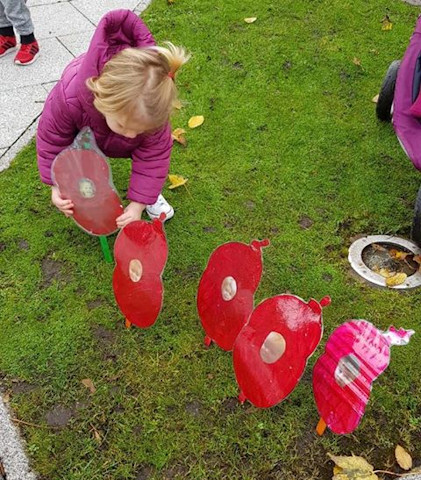 Volunteers Jan Eaton-Dykes and Ros Liddle spearheaded a project (seen further up this list) to honour the 850 soldiers from Middleton that never returned from World War One. 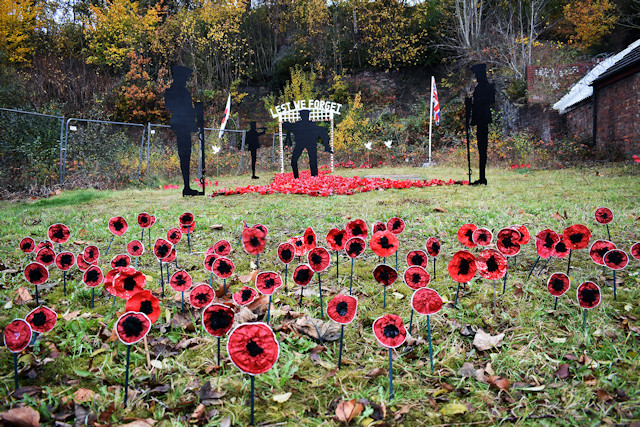 The Friends of Milnrow Memorial Park have created a mosiac of painted pebbles to mark the war centenary.
A special thank you goes to John C Jackson at Gordon Riggs Home and Leisure for donating the pebbles and also to Jamie White and Mark Bourne for all their hard work. 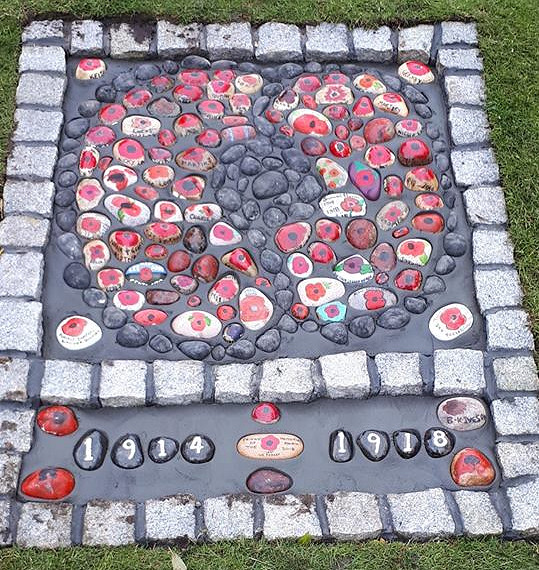 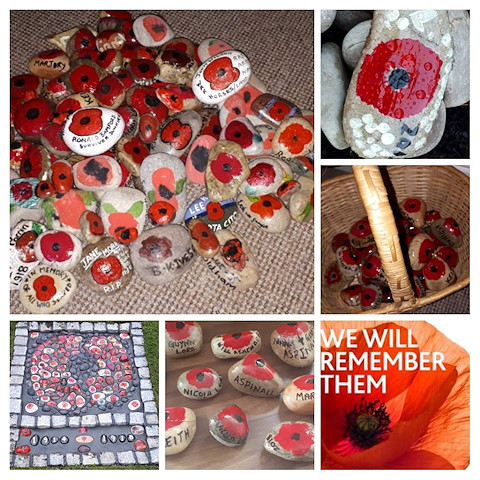 A wonderful poppy and soldier mural graces The Commercial after painting the pub earlier this summer. 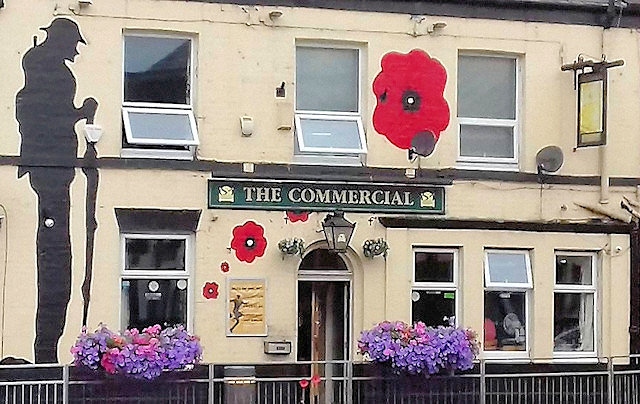 This display has been installed by the pupils at Smithybridge Primary School. 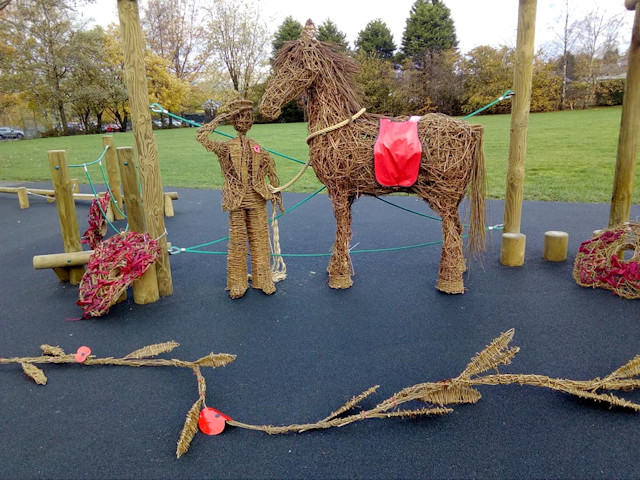 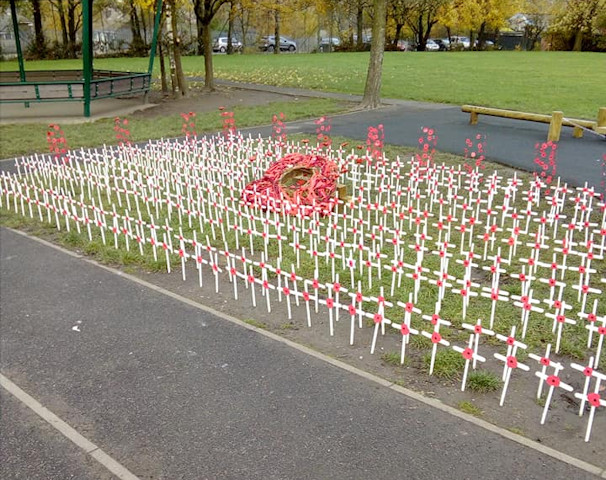 Children at Fisherfield made a window display using poppies printed using a fingerpainting technique, after visiting the Poppy Appeal to learn more about World War One and the poppy's significance. 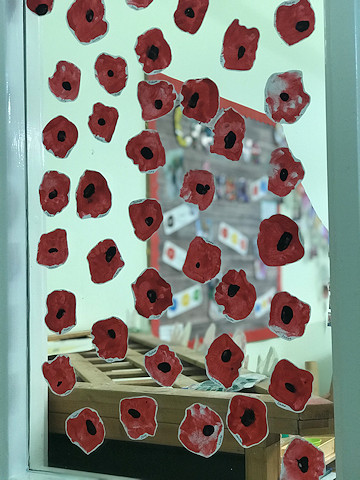 Every child in the school brought in the end of a plastic bottle and painted it to look like a poppy. The poppies were turned into a piece of art to accompany the cut out figure of a World War One Solider, kindly donated by Swift Security Products of Rochdale.

The school also raised £332.15 for the British Legion on Friday 9 November with a non-uniform day. 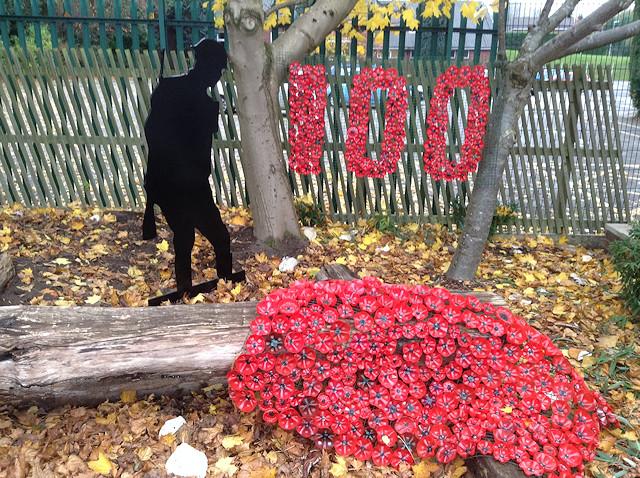 Oulder Hill Community School’s World War One Legacy Project, one of only six schools in the country to receive the Legacy 110 National Award.

The project is a map of Rochdale from 1918 with 1,486 poppies – one for each soldier from Rochdale who fought in the Great War. The poppies are placed on the soldier’s home addresses. 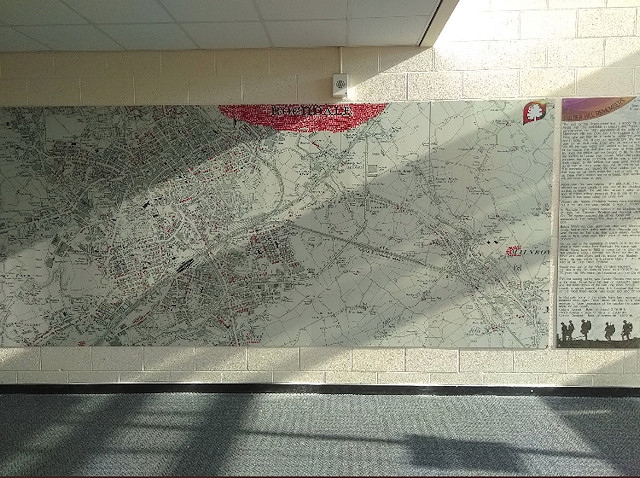