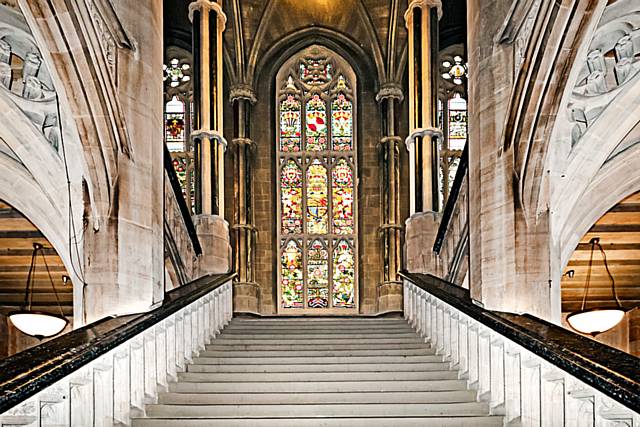 The project is funded by the Heritage Lottery Fund, which announced an initial award of £688,000 for the Willian Henry Crossland designed building earlier this year.

The award means the council can now progress plans to restore and redevelop the town hall, which opened in 1871 and is one of the country’s greatest heritage assets.

The council is currently tendering for:

Once all the tenders for this work have come back by the end of November, the council will consider all the responses, alongside STAR procurement, with appointments set to be made in January. Bids will be evaluated 70% on quality and 30% on cost.

As part of the £3m restoration for Town Hall Square, the council and STAR Procurement are also considering tenders from eight shortlisted landscape architects to redesign Town Hall Square, hoped to be appointed at the end of this month.

The proposals for the Victorian town hall include a full-scale restoration of large sections of the building and its historic rooms and features, including the Great Hall’s Magna Carta mural, ceiling tiles and extensive stained-glass windows. The outside of the building would also be restored, cleaned and better lit.

Sections of the building which are usually off limits to the public would be opened up for the first time to create a major visitor attraction which tells the story of Rochdale’s great history from the co-operative movement and cotton boom to the rich and diverse borough we have today.

Other major plans include the redevelopment of the old library on the second floor into the ‘Bright Hall’, a new space which would be used for small functions, as well as community and educational events.

Two new lifts and a new entrance would also be installed to make the whole building more accessible and welcoming.

The plans would increase visitor numbers to more than 60,000 each year and create a number of opportunities for local residents to get involved.

The deadline for applications is 5pm, Friday 30 November.

View the contract notice at: