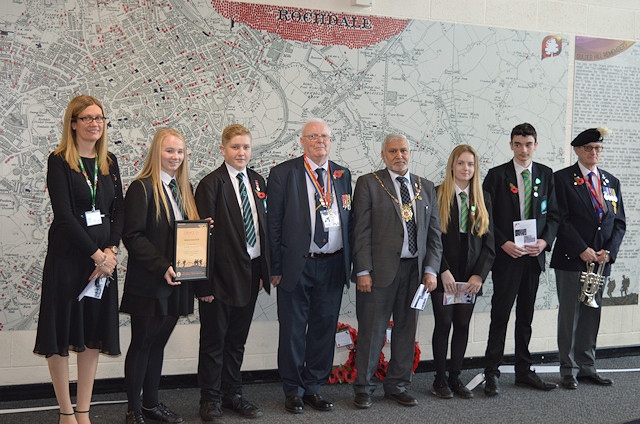 On Wednesday (7 November), the school won a Legacy 110 National Award for this project and are one of only six schools in the country to receive this honour. Two students from Oulder Hill, Jenna Holt and Jake Idiens, were presented the award in a prestigious ceremony at the Tower of London.

Rebecca Tarran, Head of Humanities at Oulder Hill Community School, said: “The project was designed by two of our Year 10 students who visited the battlefields in France and Belgium in March this year to commemorate the centenary of the battle of Manchester Hill.

“The project itself is a map of Rochdale from 1918 which is 6 metres x 3 metres and covers the length of the wall in our pupil entrance. On this map are 1,486 poppies – one for each soldier from Rochdale who fought in the Great War. The poppies are placed on the soldier’s home addresses.

The Mayor attended the memorial service where he unveiled the project. This was followed by a one-minute silence, a bugler played the last post and two wreaths were laid on behalf of the students and of the staff.

Along with the Mayor, the service was attended by the President of the Rochdale British Royal Legion branch, David Forbes, the Deputy Lord Lieutenant of Manchester and Tony Lloyd MP, the county officer, parents, governors and staff of the school.

Mayor of Rochdale, Mohammed Zaman, said: “The school created a wonderful map of Rochdale and placed poppies on the soldiers home addresses throughout the borough to remember them.

“It took the pupils a lot of time and planning, and huge effort was put in to create such a beautiful tribute.

“I am so glad to see young people paying their respects to all the soldiers from Rochdale who sacrificed their lives for our future. We must continue to teach this history and always remember them.

“I was very impressed with the unique project and would like to thank students Jenna Holt and Jake Idiens, as well as Jessica Clarke, the staff at Oulder Hill and David Forbes from the Royal British Legion for the efforts they have put in to create this tribute.”