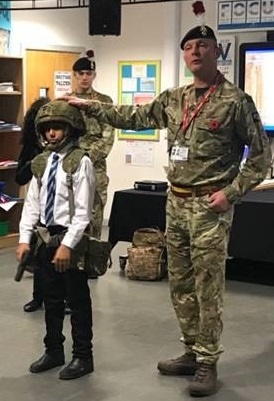 As part of World War One Centenary Commemorative week, students at Kingsway Park High School had a week of lessons, fundraising, trips and competitions.

The week started off with History lessons and a visit from the Army, doing different History sessions with students that entailed dressing up in Army Combat and learning about opportunities within the Army. 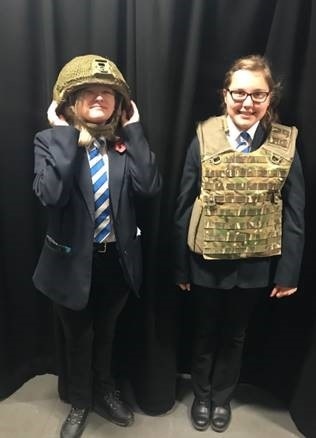 This was followed by the arrival of a canon gun on the car park that students were able to view and examine in great detail.

Wednesday started with a visit from World War veterans who came in a convoy of refurbished army vehicles, a great day which the students thoroughly enjoyed.

A selection of History students visited the World War One Pop up Garden in Rochdale Town Centre, a memorial garden, created by Rochdale in Bloom volunteers to remember those who fell in the war between 1914 and 1918. Our students received a special invite from The Mayor, Mohammed Zaman, to enjoy the veterans’ breakfast served by the Mayor himself in Rochdale Town Hall.

A Remembrance Service followed the brilliant breakfast, joined by other schools and students from across the borough, where a wreath was laid and handmade ceramic poppies, made by the Kingsway Park students were left in memory of our war heroes.

Throughout the week the catering staff provided World War One themed food in the restaurant, and as a way of saying thank you to The British Legions Campaign, various activities were carried out.

Displays of students work and World War One Displays will remain around the school for the next few weeks including the ‘100 Hand Shape display’, where each hand contains a quote from each student of why they are appreciative to all those who served in the war.

We have had a fantastic week in school and a lot of hard work has gone into the organisation, for this we would like to thank the History Department for their commitment and enthusiasm that they have provided to enable this week to be a success.