Monday, I cut the ribbon to officially open Bargain Buys in the Wheatsheaf Shopping Centre. The branch has many stores throughout the UK and they were really pleased to have their grand opening in Rochdale. I wish them all the best and hope they do well.

At Comple@t Internet Café in Middleton, the Rochdale branch of Living Well organise a Homeless Knitting Club every week. I visited the café and spoke to members who are very keen to support the homeless by knitting different items each week such as hats, scarves, gloves and jumpers.

I was happy to see that the group also reduces isolation of the attendees whilst they put something positive back into the community. Thanks to Hayley Thomson, the community builder at Living Well, for organising and supporting the group, those who attend to knit and help the homeless and Comple@t Internet Café for providing a venue with free tea and coffee.

Monday afternoon, I had a meeting with the police and PCSO’s at the town hall. I went out with the police some time ago and invited them to join me in the Mayor’s Parlour to get regular updates and feedback on the issues they face on a daily basis. We spoke about the urge of people needing to contact 101 instead of 999, when you are in a non-emergency situation. 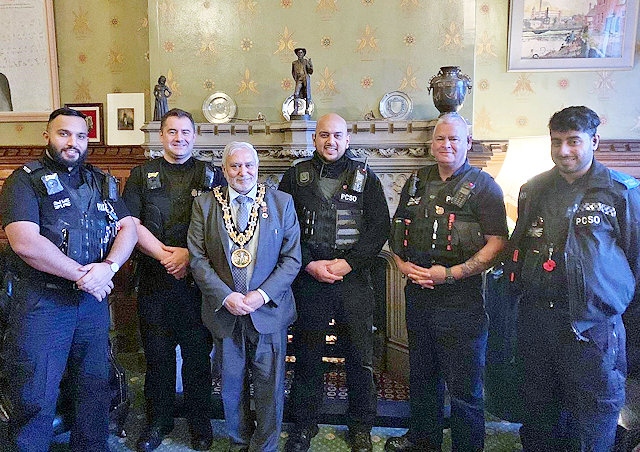 Tuesday, I joined a faith parade in the town centre. Despite the bad weather there was huge turnout as the parade travelled from Ghousia Mosque to Hedria Mosque.

Faith is a strong force and we are doing very well in Rochdale as we work on interfaith. Thank you to Rochdale Milad Committee, the mosques that joined, the parade organisers and all who took part to promote peace and unity in the community. 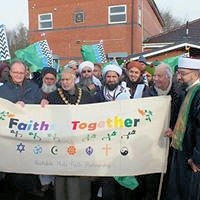 A Level 3 Health and Social Care course was launched at Castlemere Community Centre on Tuesday afternoon. This was launched to help unemployed people who want to do something in their life, but don’t know what to do or where to start. 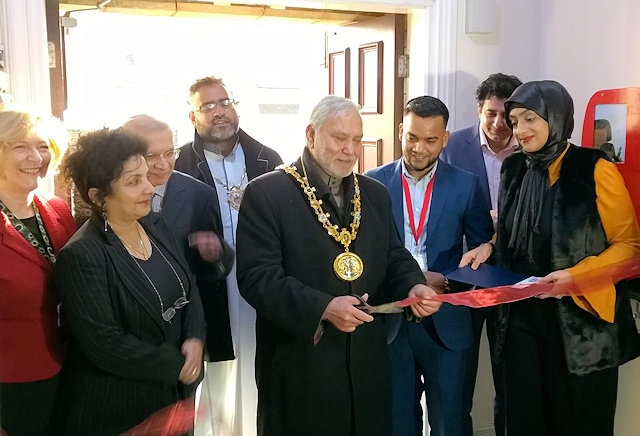 Organised by the Academy of Science Technology and Management based in Oldham, over 25 people attended and enrolled to learn something new and develop their training. The academy also offers free Maths, English and ICT courses.

A big thank you to Kamal and Kalsoom for providing their services on the day and for helping others develop their knowledge and skills to succeed.

I attended a Chinese Food Exhibition in the great hall of Rochdale Town Hall. This exhibition is touring the UK and I was so glad that they chose Rochdale as one of the places to visit. There were so many delicious food samples and a group from London also attended to record the day for a Chinese TV channel.

It was a great honour to host the group from China. I learnt so much on their culture and traditions and the foods that they eat. Thank you to all for coming to Rochdale. 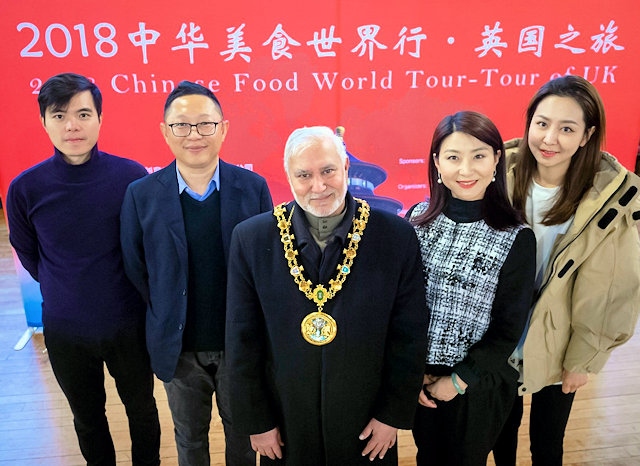 Wednesday, I had no engagements.

Thursday, a ‘Meet the Buyer’ event was hosted at the town hall, organised by Rochdale Development Agency and Star Procurement Services.

The event encouraged local businesses and local services to make connections and to keep your spend local. Thank you to Carol Hopkins and Michelle Walton from RDA for organising the event in Rochdale this year, Lorraine from Star Procurement, the businesses who took part from in and out of the borough and the catering staff at the town hall for providing lunch.

Thursday evening, I went to St Ann’s Academy in Middleton for their annual awards evening. I also attended this last year with parents, teachers, pupils and members of the school’s governing body.

The school work very well as a team and the students always perform well. I was pleased to see the progression of individuals, especially those who achieved more than one award. Thank you to Terry Linden, the chair of governors, principal Caroline Preece and all of the staff at the school for their hospitality, flowers and the portrait I was gifted that is now displayed in the Mayor’s Parlour. I wish the students all the best for the future.

Friday, I attended the 2018 Man of Rochdale Luncheon hosted by Springhill Hospice. So many businesses attended to support the event for charity and took part in raffles and an auction.

I was very pleased to see John Kay announced as the winner. John is the chair of the Mayor’s Charity committee and is always helpful with his fantastic ideas. Thanks to all the men who attended for a good cause and to John for the fantastic service he provides for the community.

Saturday, I went to Wardleworth Community Centre with my daughter, Mayoress Naaira Zaman and Tony Lloyd MP. The centre hosts classes for young people to support their main core subjects such as English, Maths and Science.

The centre secured funding from Children in Need and now has well qualified teachers who are all happy to attend and help the students develop their skills. The centre is especially useful for young people who aren’t able to get help from their family at home, so they can develop new skills here whilst making connections with new friends.

Thank you to the teachers here for providing their service and for helping young people better prepare for their future. 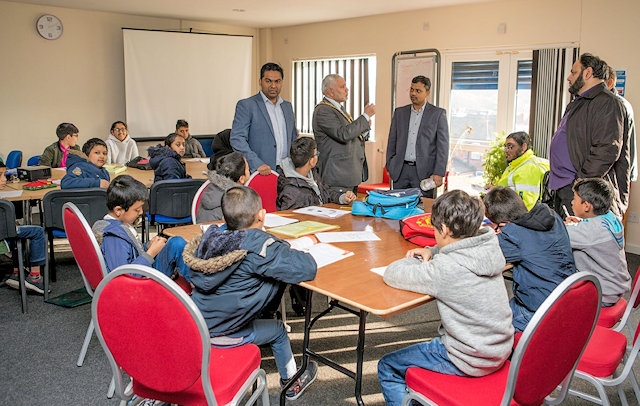 Saturday marked the 85th anniversary of the Ukrainian Holodomor famine. To mark the occasion, I visited Rochdale Memorial Gardens before joining a service at St Chad’s church.

There was good attendance from Rochdale’s Ukrainian community who said prayers and sang hymns in both Ukrainian and English. Tony Lloyd MP said grace and Reverend Mark Coleman conducted the service as attendees told of their experiences and what they witnessed. It was interesting to learn the history of Holodomor and remember those who lost their lives. I was glad to be a part of the service. 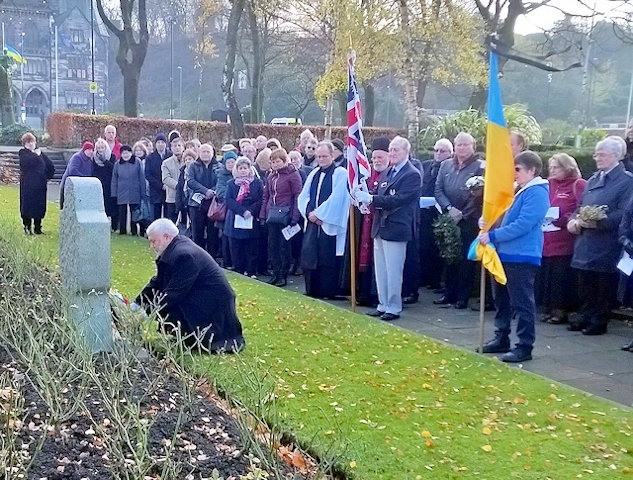 Rochdale’s Christmas lights were switched on Saturday afternoon. The event had a very good turnout with a number of stalls and children’s entertainment both upstairs in the great hall and downstairs in the town hall.

A big thank you to the Mayoral team, the town hall staff and Councillor Sue Emmott for organising and making sure everything went according to plan on the day.

Evening, I was invited to Castlemere Banqueting Hall for a musical evening titled ‘Oldies and Goldies’. A selection of Indian and Pakistan songs were played and sung by local talented artists who took requests from the audience. The event was a nice relaxing end to a long day.

Tasneem Shazad organises the musical evenings on a regular basis to bring members of the community together to have a good time. Thank you to Tasneem, Dr Shayel Ahmed, Mohammed Sheraz and all others involved in hosting the event and making it a success.

Sunday, I went to Springhill Hospice’s Christmas Fair and was joined by the Mayor of Whitworth, Madeline De Souza. It was a cold day, but there was a long queue outside the marquee of people waiting for me to cut the ribbon and rush inside. There were many stalls selling Christmas gifts, food and goods.

I was pleased to see the huge support Springhill Hospice gets from volunteers and from those who attended. Thanks to the Springhill Hospice team for keeping everything running and maintaining such an excellent service in Rochdale. 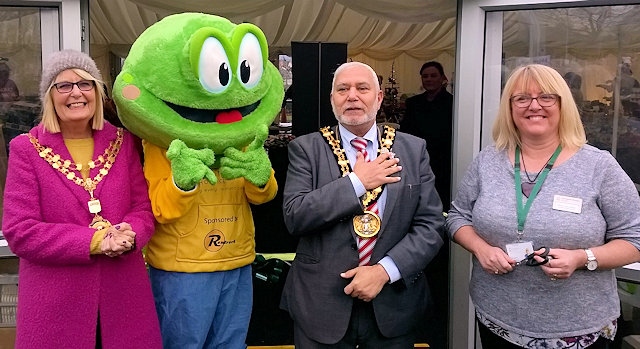 Evening, I was invited to Rochdale Golf Club for the 35th anniversary of Rochdale Parkinson’s UK. This again was a well-attended meal with over 140 people, including representatives from different organisations and businesses that have worked with Parkinson’s in the past.

Parkinson’s can affect anybody at any age and the huge support that everyone gets was so warming to see. This is one of my chosen charities for the year, so I was happy to attend and continue to help raise money.

Thank you to the president of Parkinson’s Rochdale branch, Jim Gartside and Geoff Poulton who invited me. 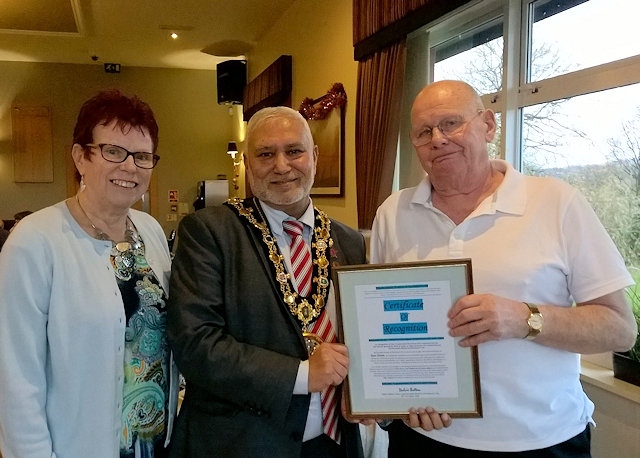