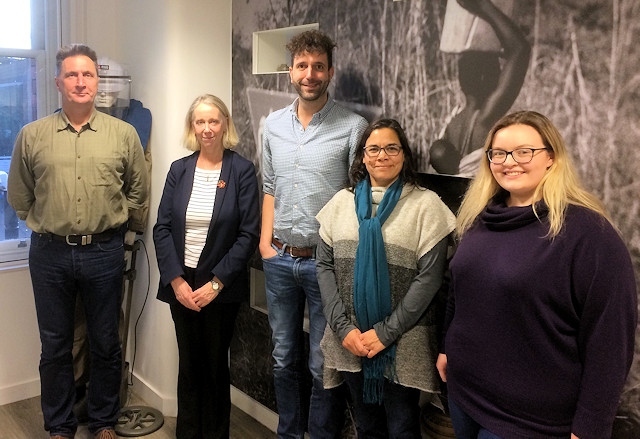 Liz McInnes MP with staff from MAG at their Manchester office

Liz McInnes, MP for Heywood and Middleton and Shadow Foreign Minister, has visited Mines Advisory Group (MAG) - based in Manchester - to discuss their work and offer her support for their work of land mine clearance and ammunition disposal.

MAG is a charity which since 1989 has worked around the world to find and destroy landmines, cluster munitions and unexploded bombs in places affected by conflict. Since 1989, they have helped over 18 million people in 68 countries to rebuild their lives and livelihoods after war.

In 1992, MAG joined other similar organisations to form the coalition International Campaign to Ban Landmines (ICBL) and their work paid off in 1997 when the Ottawa Treaty – banning the production and use of anti-personnel mines – was signed by 122 countries. Later that year, the ICBL jointly received the 1997 Nobel Peace Prize in recognition of its efforts.

Liz McInnes MP said: “I was delighted to visit Mines Advisory Group and to meet the charity’s Director of Policy & Advocacy, Chris Loughran, and many other staff. MAG is a very prestigious organisation, as their Nobel Prize award in 1997 proves, and since their formation in 1989 they have helped millions of people affected by conflict around the world.

"We had discussions about the importance of Department for International Development funding in enabling them to continue their work of land mine clearance and ammunition disposal, and in particular we spoke about their work in Africa which I cover as part of my role as Shadow Foreign Minister. As well as mine clearance, MAG works on arms management and destruction (AMD), to improve the safe and secure storage management of weapons and munitions. This work began in equatorial Africa, assisting with the destruction of small arms and light weapons, and has since grown to be a substantial part of their global effort to create a safer future for people affected by conflict, armed violence and insecurity. MAG is also working in Sri Lanka following the Civil War which ended in 2009 and are aiming to complete the land mine clearance there by 2020.

"MAG is very proud that Manchester is home to their international HQ, and Manchester should be proud of having them too.”