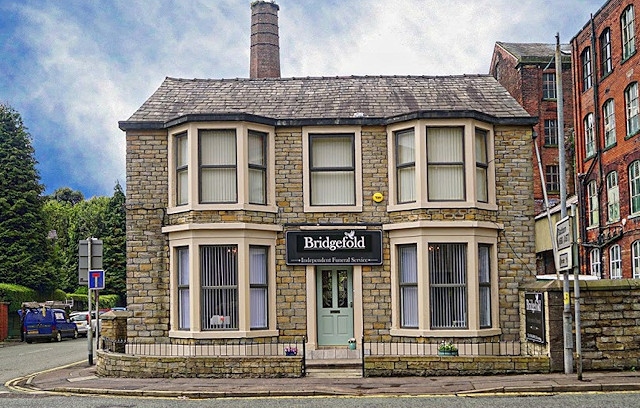 A heartless thief stole donations for Springhill Hospice after breaking into the office of Bridgefold funeral directors on Mellor Street during the early hours of Saturday morning (5 January).

After smashing the window with a large flagstone shortly before 4am, the offender ransacked the office before making off with donations left to the hospice.

Staff have confirmed they will replace the stolen donations.

CCTV footage is currently being reviewed with the funeral directors planning to step up security with a new alarm and CCTV systems.

Owner of Bridgefold, Doreen Clayton said: “We have contacted all the families informing them of this incident and we would also like to reassure everyone that people’s loved ones have not been disturbed.

“A few rumours have been going around online, which we are absolutely mortified by, and we would like to reiterate that what you may have read is simply not true.

“If anyone has any information that could help the police investigation, please get in touch.”

A Greater Manchester Police spokesman said: "Police were called shortly before 9.20am on Saturday 5 January 2019 to a report of a burglary at a premises on Mellor Street, Rochdale.

"It is believed an unknown offender/s gained entry to the premises before stealing a quantity of cash between 4.30pm on Friday 4 January and 9am on Saturday 5 January.