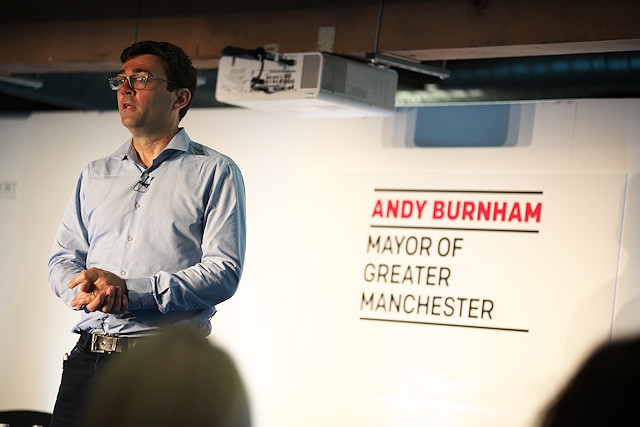 Young people in Greater Manchester are to be given a ticket to ride in a bid to help them seize all the opportunities the city region has to offer them.

Greater Manchester Mayor Andy Burnham has announced that 16 to 18-year-olds will be issued with a free ‘Opportunity Pass’ as part of a two-year trial beginning in September.

The Mayor added that free bus travel would ensure youngsters horizons were not ‘limited by financial barriers’ and act as a passport to study, apprenticeships or work.

The pass will also give free or reduced entry to participating sporting cultural and leisure venues.

However, it is not yet clear how the estimated £12m to £15m cost of the scheme will be paid for – and the Mayor admits it could in part fall to council tax-payers.

The exact detail of how it will be funded is expected to emerge in the combined authority’s budget-setting process next month.

Setting out his vision for the future of Greater Manchester at a city centre event, Mr Burnham said it was time to get the best from young people, calling them the region’s ‘true future’.

Mr Burnham said: “From most of the outlying boroughs in Greater Manchester, young people can see this city centre changing on a weekly basis, rising upwards.

“Some tell me that it feels like a different world; that they can’t imagine themselves working here.

“The message I am sending them today is clear and direct: This is your city. Explore it, own it, build it. We believe in you and we will back you.”

The Mayor’s office will work with the Youth Combined Authority to finalise the details of the plan, the costings for which will be thrashed out in the budget-setting process.

Mr Burnham said that the two-year timescale had been set as it was not known what the ‘full extent’ of the cost would be as take-up and usage rates were both unknown quantities at this time.

However, he added that similar schemes elsewhere suggested an uptake of around 70pc.

Asked whether the Mayor’s council tax precept may have to go up to pay for the scheme, he said: “Possibly we will have to ask people for a contribution because bus reform does depend on it.”

But he claimed there was ‘a big business case’ underlying the scheme.

“The precept we are looking at would have to begin to pay for the whole process of bus reform, of which this is an element.”

However, he said that his office was also looking at a ‘range of ways of bringing the cost down’.

He said: “We’re already spending quite a lot of money on 16-18 travel via the colleges and what we are going to do hopefully working in partnership with them is collectivise that money and use that to offset the cost of the pass.”

Gary Nolan, chief executive of OneBus, said: “Bus operators are working with the Mayor and the Combined Authority with a view to delivering a ground-breaking scheme that would offer free travel for 16 to 18-year-olds. As the scheme is currently still in discussion, full details are yet to be agreed.

“Buses play a vital role in keeping Greater Manchester moving, accounting for three in every four journeys made on public transport and anything that encourages young people to choose buses for their journeys should be welcomed.

“Bus operators already offer significantly discounted travel for young people in Greater Manchester and have worked with the Mayor to deliver half price bus travel for around 100,000 16 to 18-year-olds in the region at no cost to taxpayers. Building on this significant investment, there is a window of opportunity to deliver even more improvements to benefit young people right across the region.

“The free travel scheme will encourage young people to continue to use public transport into adulthood, harnessing the potential of the bus to make the economy stronger and build a more inclusive society.

"We look forward to continuing to work with the Mayor and the Combined Authority to deliver even more improvements to the bus network in Greater Manchester.”