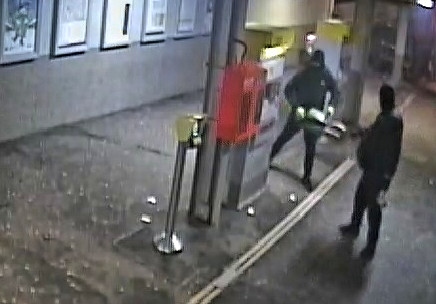 Three men have been jailed for a total of more than 10 years for their part in a series of thefts from Metrolink ticket machines.

Milnrow was the third of four stops targeted during the early hours of 9 December, with one machine broken into at around 3am.

At Manchester Crown Court today, Wednesday 9 January, Michael Gavin, (1/8/1976), of Eastham Way, Little Hulton was sentenced to five years and four months in prison after pleading guilty to conspiracy to steal and possession of a bladed article.

David Rodgers, (1/5/1975), of Mulberry Court, Salford pleaded guilty to conspiracy to steal and was jailed for five years.

Paul Higham, (19/12/1978), of Eastham Way, Little Hulton, was jailed for two-and-a-half years after pleading guilty to conspiracy to steal in respect of the incidents on 11 December.

It was during the last theft, shortly after 4.30am on 11 December, that the suspects were arrested after being spotted by a CCTV operator at Crumpsall.

Police – who had responded to the previous break-in at Heaton Park just a few moments earlier – quickly responded and detained Gavin and Rodgers at or near the scene. Higham was arrested a short time later.

The sentences follow a similar spate of thefts that took place between July 2016 and January 2017 across Metrolink. The offences were linked to other thefts around the country and were subsequently incorporated into a British Transport Police investigation, which resulted in two people being jailed for a total of seven years in November 2017.

Transport for Greater Manchester’s Head of Metrolink, Danny Vaughan, said: “These planned and orchestrated thefts from ticket machines are not a victimless crime, but caused inconvenience to customers, worry to those living near to stops, and significant financial cost to TfGM.

“We adopt a range of tactics to prevent things like this happening, including enhanced security features on machines, frequent emptying and overt and covert patrols and surveillance.

“We were able to catch these men in the act and these sentences and our security measures should act as a strong deterrent and proof that any perceived opportunity is far outweighed by the risk and consequence.

“We are committed to preventing incidents of crime and antisocial behaviour on our transport networks and ensuring a safe and pleasant journey for customers.

“While incidents continue to be rare when compared with the number of people that use our buses, trams and trains, our work as part of the TravelSafe Partnership (TSP)  ensures this remains the case.”

The TSP exists to keep public transport safe across Greater Manchester by offering reassurance to passengers and preventing and dealing with incidents of crime, antisocial behaviour and fare evasion.

The TSP operates an extensive youth education programme, which includes visits to school and youth groups to educate and inform on the effects of antisocial behaviour on victims.