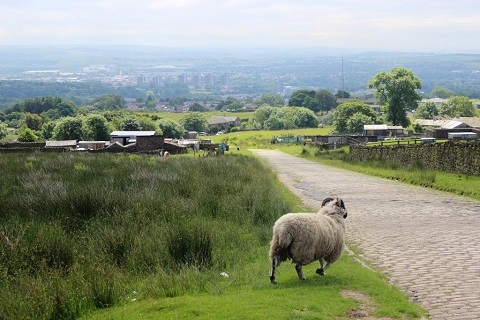 A view from the Cotton Famine Road over Catley Lane Head, Rooley Moor

A community’s bid to take control over how their historic area develops is expected to take an important step forward this week.

Residents in Rooley Moor have developed their own neighbourhood plan which would ultimately take precedence over the council’s own proposals if adopted.

A foreword to the plan, penned by RMNF chairman Andy Meek, says the vision for the area reflects the thoughts and feelings of local people who have a real interest in their community.

Neighbourhood plans were introduced by the government via the 2011 Localism Act, in a bid to give communities more control over housing and planning decisions in their areas.

The plan will have to be approved by more than 51% of voters in a local referendum if it is to become the guiding strategy for how Rooley Moor evolves, but there is work to do yet.

On Wednesday it is expected to clear an important hurdle and be approved for publication and independent examination.

A six-week consultation would then be launched as soon as possible.

Alan Rawsterne, secretary of RMNF says the area, famous for The Cotton Famine Road, which was built by mill workers while Britain was starved of cotton during the American Civil War, has been overlooked for too long.

He said: “We will be delighted if it gets approved, we look very much at the area as being the jewel in Rochdale’s crown.

“Don’t get me wrong, there are lots of splendid areas, but it was kind of unappreciated.

“When the BBC came and started to have a look at the area for the Black History of Britain programme, the relevance of the Cotton Famine Road and the history and heritage of the area started to become more prominent.

“It’s all these things tied together that gelled people and since then we have had funding for a heritage lottery project, we’ve been involved in Rochdale in Bloom and should have more community clean-ups.”

Mr Rawsterne says the initial impetus for the plan arose partly as a result of Coronation Power’s refused plans for a wind farm on Rooley Moor.

He added: “It was apparent that the people who live in the area are passionate and care about it.

“One of the things that came to the forefront was the history and heritage of the area, that was how the forum came about. It was the desire to protect and enhance the area.”

As part of the process of developing a neighbourhood plan, RMNF was required to carry out a pre-submission consultation with residents.

Mr Rawsterne said that the needs and wants of those who lived in the area, and those who visited it, were very similar.

These included a history and heritage, open space and facilities for walkers, riders, and anglers.

These were as important to people outside the area as those that lived in the area and that removed any thoughts of NIMBY-ism.

He added: “If it goes through the next stages, and ultimately is adopted, there would be a planning document there that reflects the wants of the community that live in and use the area, and that would have to be a consideration for any planner.

“The other thing is the forum has the right to be a consultee to any planning application in or affecting the area, and we would argue that our means of communicating within the locality are far better than the council’s. We would be able to make people aware of what was going on.”

Rochdale Township Committee meets at Number One Riverside, on Wednesday, 23 January from 6pm.