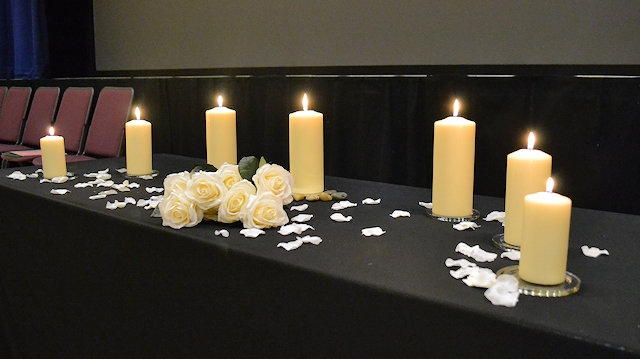 The Commemoration began at the Memorial Gardens in Manchester Old Road, where the Middleton Holocaust Memorial Stone is situated.

The poem “Never Shall I Forget” written by Nobel Peace Laureate Elie Wiesel, who had survived Auschwitz and Buchenwald Concentration Camps, was read.

The Mayor, Councillor Mohammed Zaman read the words from the Old Testament “they shall beat their swords into ploughshares” and a prayer of Blessing and Peace was offered by the Mayor’s Chaplain Imam Hassanat Ahmed.  Each said their own words of welcome, emphasising the importance of the event.

The theme for this year was Torn from Home and the Act of Commemoration.

The Commemoration continued at Middleton Arena where a powerful film was shown, highlighting the scale and impact on human lives of modern slavery and how to recognise the potential signs.

Following this there was a reflection recognising genocides which have taken place in the twentieth and twenty first centuries, including ongoing atrocities in Darfur and the plight of the Rohingya Muslims from Myanmar. Also, marking that 2019 is the twenty fifth anniversary of the genocide in Rwanda, a candle was lit for all victims of oppression and genocide.

Creating the link from the Great War Armistice Centenary, 1918 - 2018, the HMC event traced the narrative onwards through the Treaty of Versailles, the desperate situation in Germany following the war and the rise of the National Socialist Party and Adolf Hitler becoming dictator.

The impact of the increasingly tightening grip on the lives of Jewish people and other groups the Nazis did not want within their Reich was told, leading to the events of Kristallnacht ‘The night of broken glass’.  Jewish businesses, homes and synagogues were attacked and burned and Jewish men rounded up and taken away.  It was then shown how this spiralled into the depraved acts against humanity we know as the Holocaust. 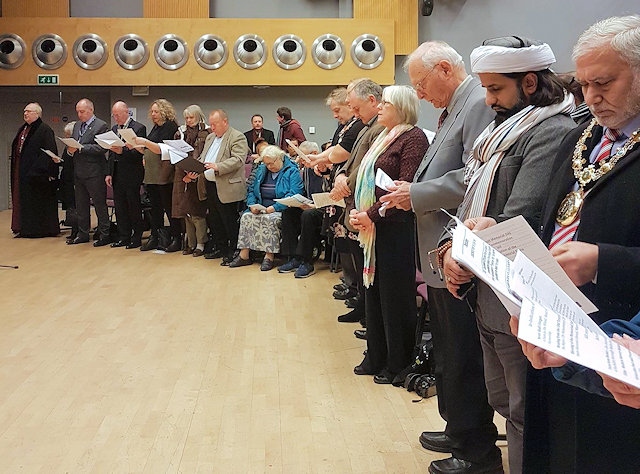 Taking part in reading the narrative were young people from Rochdale Borough’s Youth Service, who told about the Reichstag Parliament building fire of 1933 and how, though not proven, this was used by the Nazi regime to blame Hitler’s political rivals, the Communists.  Within twenty-four hours, Freedom of the press, Freedom of expression and Freedom of public assembly were curbed.

Fitting with the theme Torn from Home, a group of the young people performed the poem “First they came” written by Pastor Martin Niemöller

A moving firsthand account of witnessing the impact of Kristallnacht in Berlin the following morning, was given by Henry West MBE who was a young boy on his way to school.  Mr West later fled Germany to come to England with his parents.  His emotive account was warmly appreciated and greatly impacted on those in attendance, including not least the young people.

As the theme music from Schindler’s List was played on violin by “Fiddlestix”, Six Candles of Remembrance were lit by the Mayor and representatives of Poles, Trade Unionists and Disabled and LGBT communities, all of whom were murdered in large numbers by the Nazis.

The final candle was lit by Henry West on behalf of the Jewish Community.

A Minute’s Silence was then observed.

The Carers’ Choir ably supported the singing of ‘My Prayer is Peace Unbounded’, set to Holst’s “Thaxted”.

Senior representatives of Rochdale Council read the Statement of Commitment to continue holding Holocaust Remembrance, to learn the lessons from the past and to fight the evils of racism, anti-Semitism, xenophobia and discrimination.

Louis Tweedale, Rochdale’s Member of Youth Parliament, read the words of Nelson Mandela “if people can learn to hate, they can be taught to love, for love comes more naturally to the human heart.”  He then led everyone in making a Community Pledge for Cohesion

Following the event the Mayor Councillor Zaman stated that “Love, peace and harmony all go hand in hand and that is an ultimate solution for a peaceful world”.

The Annual Holocaust Commemoration is organised by the Borough of Rochdale Multi-Faith Partnership in conjunction with Rochdale Council’s Neighbourhood Services.

The organisers would like to thank the many people who participated in the Commemoration and all those who attended.  Each year the Act of Commemoration takes place in a different Township of the Borough and in 2020 it will be held in Littleborough.