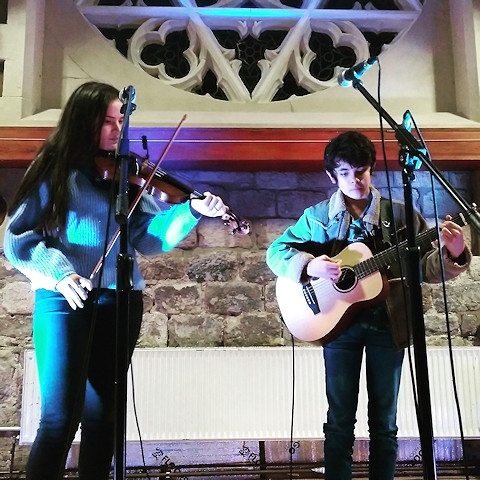 For the third year running, Todmorden Folk Festival organised a youth music competition to showcase local talent and offer the star prize of being the opening act for the main Saturday night concert at the Todmorden Unitarian Church.

Orladh & Leo proved very popular and put in a fine performance, playing three songs, plus an encore, on their way to winning the award.

The teenagers met around five years ago in the primary age folk group ‘Little Folk’. About 18 months ago, after watching the duo practise together before a gig, their current tutor, Cliff Woodworth, thought they'd make a nice duo, so he got them to perform at the Rochdale Music Festival.

Since then, they've racked up a number of performances, including bigger ones at 2018's Todmorden Folk Festival (as runner's up in the youth award) and supporting local Irish group, The Scattering, at a sold-out gig at the Curtain Theatre in Rochdale.

Orladh & Leo will also be performing at the Rochdale Music Service Festival of Performing Arts, at the Town Hall on Thursday 7 February and the Music for Youth Regional Festival at Wardle Academy on 31 March.