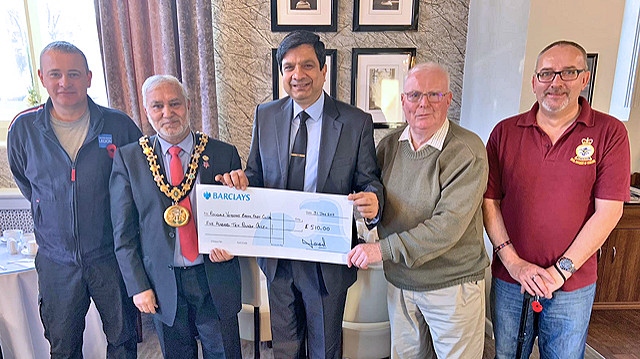 A former navy lieutenant has presented Rochdale’s Veterans’ Breakfast Club with a cheque for over £500.

Councillor Faisal Rana, who served 15 years as a para in the Pakistan Navy, raised £510 through donations from family, friends and local businesses.

He was joined by the Mayor, Councillor Mohammed Zaman, when he handed over the cheque to president of the club, Wing Commander David Forbes DL MBE.

Councillor Rana said: “The breakfast club does a great job supporting Rochdale’s veterans. Not only is it a friendly social event, former servicemen and women can pop in for advice on a wide range of issues, from anything from help with housing to problems with benefits.

“As a navy veteran myself, I can see the tremendous good work the breakfast club does and was keen to help. It’s been running for almost three years and in that time the club has provided social and welfare support to hundreds of members of the armed forces family.”

Wing Commander Forbes said: “We are grateful to Councillor Rana and his family and colleagues for such a generous donation. It will allow the club to keep going and offering support and comradeship to the many local people who have served in the armed forces.

“It’s a great place for likeminded people to meet, chat and banter - and not forgetting a great breakfast.”

The club meets every Thursday at 9am in Rochdale Town Hall’s Clock Tower restaurant.