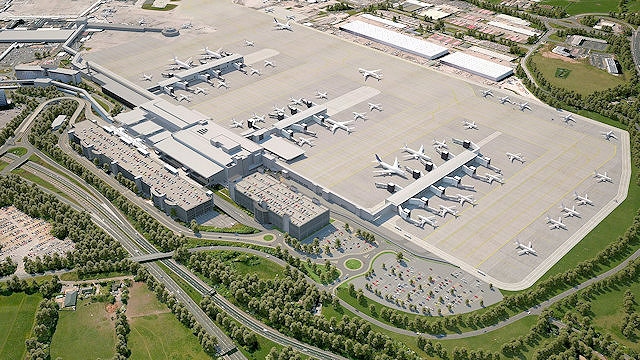 Councils across Greater Manchester are lining up plans to fund a multi-storey car park at Manchester Airport – at a cost of more than £50m.

The 10 authorities – already shareholders in the airport – will invest in a new ‘drop and go’ facility close to Terminal Two.

The plans have gone before each executive cabinet for sign off in recent weeks and have been discussed in behind-closed-door proceedings.

However, minutes from the meetings of several authorities have revealed details, with £5.6m understood to be the figure each is contributing to the equity investment scheme.

It comes within months of the GM authorities lending more than £200m to help fund the airport’s new £1bn ‘super terminal’ project.

Council documents reveal the investment will ‘cover the upfront capital costs’ for the 7,500 capacity parking facility.

A partnership will be established with Manchester Airport Group (MAG) in relation to the car park, with MAG ‘contributing land, intellectual property and expertise in the management of car park operations’.

The district councils will stand to receive an annual return on their investment, in addition to the dividend they receive from their shareholding.

A Manchester Airport spokesman said: “This is a one off investment project in a new car park at the airport for the 10 Greater Manchester councils, which will involve them providing new funding for the project, and then benefiting from the proceeds from the car park.

“Like many businesses of our nature, we present our shareholders with investment opportunities whenever we believe they have the potential to deliver benefits to them, at the same time as enabling us to further invest in facilities for our customers.”

Last year councils contributed £200m worth of loans as part of plans to double the size of Terminal Two, adding 10 million annual passengers over the next decade.

Manchester City Council, as the joint largest shareholder of the airport alongside private investor IFM, has agreed to loan the Manchester Airport Group (MAG) £125m to support its transformation programme.

The remaining nine GM councils; Salford, Trafford, Bury, Bolton, Rochdale, Oldham, Tameside, Stockport and Wigan, who have an equal 3.22% share in the MAG holding company, are also to loan around £11m each.

A decision report about the car park investment from Wigan’s recent cabinet meeting, said: “The cabinet was advised that Manchester Airport was the only airport outside London and the South East with two runways and had recently attracted new routes to destinations such as Beijing and San Francisco.

“It had potential to accommodate an increase from its current level of 28 million passengers per year to 55 million using its existing runways.

“The transformation project to provide the first class terminal facilities in Manchester was an important step to realising this potential.”